Recently, our son Brian escorted me to the Worcester, MA airport that had a weekend display of the actual kind of planes flown by the US Air Force during World War II. I donned my original jacket that I had worn throughout my service in the 392nd Bomb Group of the 8th Air Force and a cap showing the base I was stationed at – Wendling, England. With that outfit it was apparently quite obvious to most everyone in the crowd that I was a World War II veteran. I was quickly escorted to the front of the line for a tour of the B-24 bomber on the field. After the tour, people constantly approached me to inquire about my wartime experiences and to talk about their family members who were also WWII veterans. Quite a number of people asked to take a photo with me and some had me turn around so that they could get a picture of the back of my flight jacket with its paintings of 30 bombs (denoting the number of missions I had flown and also the two sexy-looking gals, which explains the name given to our plane Double Trouble.   Attached photos were taken by Brian Winters. Some of the stories I told to the people at the airport follow: 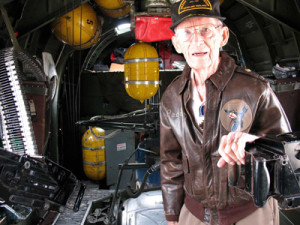 As I toured the B-24 I found myself on the narrow gangplank in the open bomb bay. It instantly reminded me of one of my 30 bombing missions on Germany and Occupied France. I had triggered the release for the bombs we were carrying to fall upon our target. To my horror, the bombs did not drop out of the plane. After consultation with the pilot and co-pilot, it was agreed that it would be highly dangerous for us to land at our home base with a load oflive bombs. So I donned a portable oxygen mask, opened the bomb bay doors and stepped gingerly onto the narrow walkway with 500 lb bombs on both sides of me and viewing nervously the big open spaces through which the bombs were intended to drop towards earth (of course, I did have my parachute on) . Holding on to the railings with my left hand I carefully defused each bomb. And so we managed to arrive at our home base safely.

Nearing the end of my tour of duty, I was on a bombing mission attacking a Nazi airbase in France. We dropped our bombs successfully on the field, but were quickly attacked by German fighter planes. Two came head-on toward us. The pilot tried some evasive actions, and I fired off my twin 50 caliber machine guns. I sent the first Messerschmitt smoking into a downward spiral, but the second one got off a few shells that knocked out one of our four engines and another shell exploded alongside our cockpit. The pilot was struck by a fragment in his back and the co-pilot was hit in one shoulder.   Our squadron sped on home, but we fell behind – stragglers. The co-pilot called me to help him in the cockpit, because the pilot was semi-conscious. We ordered the crew to dump all excess weights as the ship was losing altitude. As we neared the English Channel, I suddenly spotted two German fighter planes rising up from a field ahead of us and heading in our direction. I alerted the gunners, but we 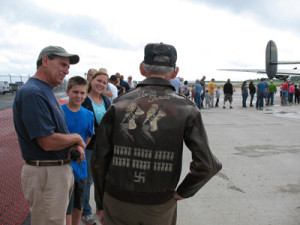 knew we were in quite a helpless situation. And then just as suddenly, out of the sky above came two US P51 fighter planes and the German planes never knew what hit them! As we neared England, the co-pilot determined that with our shrinking fuel supply and loss of altitude we could never make it to our home base. We had our radio man send a”Darkie, darkie” signal denoting a plane in trouble. An English fighter base responded and instructed us to land at its field, which meant a much shorter landing strip. As we neared the base, we learned that our wheels would not come down because we lost hydraulic fluid. The belly gunner was instructed to lower the ball turret with its machine guns pointing downward to help slow us down. As we hit the runway we found ourselves speeding straight toward the flight tower- men in the tower scrambled down hastily and leaped away. Fortunately, the plane came to a halt about 20 feet away from the tower. Our home base sent a plane to pick us up. This story is covered in a book, “Night of the Intruders” by Ian McLachlan, published in England. Incidentally, while our crew was on leave following that ordeal, Double Trouble was repaired and assigned to another crew. On their very first mission they were shot down. All the crew members were killed and that was the end of Double Trouble. 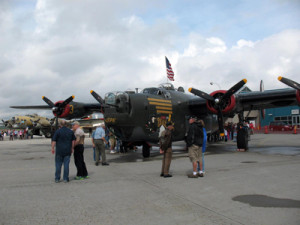 When I completed my tour of combat duty, I was promoted to 1st lt. and assigned as Asst. Group Bombardier. So I was privileged to give pre-flight instructions to the bomber crews that attacked the Germans on D Day. I was awarded the Distinguished Flying Cross, Air Medal with 3 Oak Leaf Clusters, Distinguished Unit Citation, and Victory & Defense medal. After the War, I served in the Air Force Reserves and was promoted to Captain and finally to Major. I was appointed Indiana Personnel-Manpower Director for Lake County Indiana Civil Defense.

I regret to report that my World War II pilot, co-pilot, and navigator are no longer with us, so I am the only surviving officer of Double Trouble. 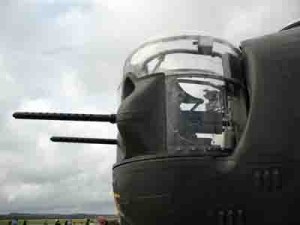 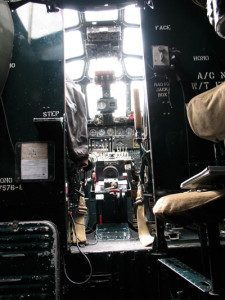