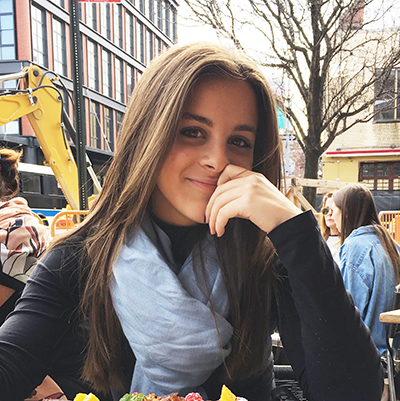 What is courage? Courage to me is the ability to stand strong and put yourself out there in situations that may seem tough and difficult to understand. Throughout one’s life, one will deal with obstacles they never believed they may one day have to face. Courage is considered to be an attribute of good character that makes us worthy of respect. Courage is not something that’s just physical, but it’s also a quality of one’s personal mentality. One must be able to feel the sense of fear and choose to act. Letting go of the familiar and expanding one’s horizons shows a lot about one’s character. Certain situations such as auditions, presentations, sports events and so forth, all allow one to showcase their qualities and sense of courageousness.

The period of high school, only some of the craziest, most fun, and unpredictable years of one’s life, allows an individual to gain more knowledge of their sense of character. Humans, especially teens, tend to shrink away from doing what is difficult, unpopular or that which may even initiate the facing of their adversaries. However, it’s my belief that our society today makes displaying courage especially hard. High school deals with the goal of graduation, losing and gaining friends, and making the right decisions which can affect the future and a countless number of life decisions. One is faced with reality. This requires a sense of courage in order to pursue, understand and navigate through the problems one must overcome. While high school should be fun and youthful, there will always be a negative quality with every hard decision. Whether it’s as seemingly simple as spending money wisely or making a life changing decision, courage is a quality one must possess in order to make proper judgement.

Furthermore, healthy courage is always about forward movement and growth. For example, leaders should always strive to challenge and push their teams toward positive progress. This involves risk and action. Once these leadership skills are practiced and exemplified, leaders have the opportunity to become a role model for others to follow. The use of courage when acting as a leader must be displayed through discipline, open-mindedness, friendliness, fairness, and honesty. Respect is gained from certain positions such as these; yet it is important to note that it can be easily be lost when judgement is clouded by influence and the lack of knowing how and what to prioritize. When fairness is sacrificed to bias, true bravery is not practiced. Bravery is a component in dealing with every obstacle.

Courage can co-exist with fear. In fact, it acts in spite of fear. One cannot build courage with minor lectures; like gaining muscle memory, courage only grows when one acts. It requires the act of running in order to reach the roar.

Teachers, parents, and other role models are constantly encouraging the development of courage within the minors surrounding them. Rite of passages will strengthen this quality and allow one to grow both physically and mentally. Why must one be released into reality, especially present day society, without obtaining courage? If so, it will be almost impossible to deal with real life situations. It is imperative to understand how to face the unfamiliar and put a vision into action. Failure is normal and it will happen, but nobody can recover from failure without the courage to move forward. One should feel no fear in their journey of finding what makes them feel genuine accomplishment. So, what is courage? And how do you plan to gain it within your own life?