We Remember, We Thank, And
We Reflect This Great Example

I came across Robert Modrzejewski in 1971 while playing baseball in Hawaii.  Recently, I was back in Hawaii for a film project.  Before his retirement, Major Modrzejewski was the C.O. of a Marine barracks detachment near Honolulu.  The plaque on the wall at the Naval Station headquarters reminds young aviators of two Marines that went before them.  This Easter Season, it is appropriate to share the story of this accomplished Polish-American as we can all reflect gratitude to those that served.

As told by Raymond Rolak to students of the CMU Broadcast and Cinematic College in Mt. Pleasant, Michigan

Robert Modrzejewski wanted to become a teacher when he graduated from Milwaukee’s Casimir Pulaski High School in 1953.  He then attended the University of Wisconsin-Milwaukee where he joined the Marine Corps Platoon Leaders Class.  That was the Marine Corps version of the ROTC.  He was commissioned a second lieutenant after graduating in 1957.

He took advanced training at Quantico and qualified for his Parachute Pathfinder Wings in 1961.  In May of 1962, while serving aboard the USS San Marcos with Sub Unit #2 he was promoted to captain.

By 1966, Modrzejewski was in Vietnam, commanding a company in the 3rd Battalion, Fourth Marines. They became part of a massive buildup known as Operation Task Force Delta.  On July 15, 1966, his unit was involved in Operation Hastings, an effort by Marines and South Vietnamese troops to block North Vietnamese Army units from infiltrating into the south through the demilitarized zone and Laos.  At the time, U.S. intelligence did not know that the NVA was planning a substantial offensive in the Quảng Trị Province.

After months of fighting a shadowy enemy in jungles filled with booby traps, now something he knew.  After so many patrols and stressful guerrilla ambushes, Modrzejewski looked forward to what he thought would be clarity.  He reflected that he could finally use the conventional training that he had mastered.  A large engagement would demoralize the NVA, or so he thought.

His Company K was to function as a blocking force for the other battalions involved in Operation Hastings.

The area was softened up by bombardments from A-4 Skyhawk’s and F-4B Phantoms.  Company K landed by helicopter and moved to their assigned objective.  They secured the LZ, nicknamed Landing Zone Crow and moved out along Song Ngan River Valley.  The terrain was dense jungle.  Progress was hindered by high elephant grass and oppressive heat and humidity.

Coming upon a well-entrenched North Vietnamese platoon, his men routed it and seized large quantities of ammunition and medical supplies.  It appeared to be a field hospital.  Nothing was ordinary after a short rest.

That night, all hell broke loose.  A significantly reinforced enemy force counterattacked.  The redoubt was massive and it was so dark that Modrzejewski had to request that flares be sent up so he could get a sense of what was happening.  In a chaotic three-hour battle, the Marines managed to fight off the North Vietnamese. This was the beginning of a two-and-a-half-day siege in which Modrzejewski and his dwindling force would have to keep repelling an enemy that was growing in strength.

The second night of the battle was fought at close quarters against a NVA force that was now battalion-size. Even though Modrzejewski was wounded by shrapnel, he managed to crawl two hundred yards to retrieve ammunition and provide it to a vulnerable part of his force. As the commanding officer, he positioned his men in defensive pods and called in artillery strikes.  Even as the bombardments came within a few yards of the Marine positions, Captain ‘Mo’ kept rallying his men to hold their positions.  He led by the strongest element known.  He led by example.

By the third day, his unit had sustained many casualties.  They were surrounded and it was raining hard.  They were running out of ammunition.  The enemy, now grown to the size of a regiment, attacked just before noon amid the noise of bugles and whistles and the explosions of mortars.  Facing more than one thousand soldiers, many with automatic weapons, Modrzejewski reorganized his men for close combat.  He called in air strikes again, calibrating them to hit so close that some of his men had to jump into a stream to keep from being burnt alive.  It was later stated that the Marines kept engaged even though most were burnt by napalm.

Another Marine, then Sgt. John McGinty, was cited for extra ordinary gallantry during the battle.  He was Company K, 1st Platoon leader.  Wounded, under heavy fire and with disregard for his personal safety, McGinty ran to help pinned down soldiers that were separated from each other.  Small groups of NVA had penetrated their perimeter.  The enemy had advanced between them and was fighting within their groupings.  The Marines had fixed bayonets and McGinty was firing a .45 and still passing out ammunition. 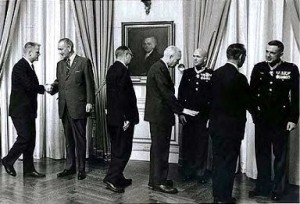 In 1968, Major Modrzejewski and Lt. McGinty in the Presidential receiving line after receiving the Medal of Honor at the White House.

Company K bore the brunt of the assault.  Finding 20 separated men, all also wounded, McGinty quickly reloaded magazines and weapons.  With the medical corpsman killed, he administered first aid, all the while continuing to direct fire toward the advancing enemy.

The bold fighting spirit showcased by these two Marine leaders inspired their men to resist the repeated attacks.  Sometime before dark, for reasons Modrzejewski never fully understood, the North Vietnamese force broke off its assault and withdrew into the mountains.

After the battle, in the post-action report, General Lew Walt described the NVA troops encountered during Operation Hastings as follows: “We found them well-equipped, well-trained and aggressive to the point of fanaticism.  They attacked in massed formations and died by the hundreds.”

After his tour of duty in Vietnam ended and in 1967, Modrzejewski, now a Major, became commanding officer of the Marine barracks at the Naval Academy.  He was informed that he would receive the Medal of Honor.  The ultimate citation was presented to him along with Lt. McGinty on March 12, 1968, by President Lyndon Johnson.  Shortly after, Johnson announced that he wouldn’t run for reelection.

In 1970 Modrzejewski was assigned as the exec officer for the Marine Corps Air Station in Kaneohe, Hawaii.  In 1976 he took further schooling at Pepperdine University in Los Angeles, getting his Master’s degree in Education.

At the time he didn’t realize it but ‘Mo’ was always an educator, especially to his Marine charges.  Modrzejewski retired from the Corp in 1986 as a Colonel and now resides in Southern California.