MELBOURNE–  Stanislas Wawrinka won the Australian Open over an injured Roger Nadal to win his first Grand Slam title with a 6-3, 6-2, 3-6, 6-3 victory Sunday.  The 28-year-old Swiss player of Polish decent had never taken a set off Nadal in 12 previous meetings.

Wawrinka attacked from the start at Melbourne Park against the 13-time major winner.  Nadal appeared to be on the verge of retiring in the second set, when he hurt his back and needed a medical time out, but recovered slowly after getting treatment to push it to four sets. 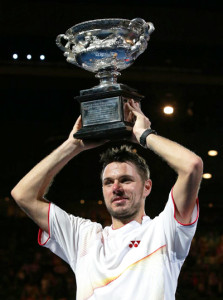 Wawrinka can attribute his success to a decision in April of last year as he employed the services of Swedish former No.2, Magnus Norman, as his coach.  He had 81 aces in the tourney.

Coming into the match he had not managed to win a set, let alone a match, against Nadal in their 12 previous meetings.  “It’s quite crazy what’s happening right now. I never expect to win a Grand Slam.  I never dream about that because for me, I was not good enough to beat those guys,” Wawrinka said.

The Australian Open started in 1905 seemed a perfect fit for Nadal.  He said post match, “This is a tournament that I feel the conditions are good for me, warm conditions that I like, good crowd.  It is a tournament that I really had some troubles physically in my career and is something that is painful for me.  But that’s part of life, that’s part of sport.  This is not the end of the world, is just another tough moment.”