WASHINGTON, D.C. A steady stream of visitors viewed “From War to Victory: Poland 1939-1989” throughout the exhibit’s October 1 to 10, 2014, display in the imposing Memorial Hall dedicated to Woodrow Wilson that links the Ronald Reagan Building and the Woodrow Wilson Center in the heart of federal Washington.

The Washington Metropolitan Area Division of the Polish American Congress initiated and sponsored the exhibit, collaborating with Poland’s Institute of National Remembrance, which created the exhibit, and The Wilson Center, which hosted the exhibit at its headquarters at 1300 Pennsylvania Avenue, NW.

The exhibit’s ten-day display was kicked off with a late afternoon opening reception on October 1.  Division Secretary and event chair, Ms. Justyna Swica, opened the short program by describing the mission of the Poland’s Institute of National Remembrance.  She then introduced the other speakers.

Dr. Andrew Selee, Executive Vice President of the Woodrow Wilson Center, welcomed the guests and spoke about the strong link between Poland and the U.S. President for whom the Center is named, and between the Wilson Center and Poland today. 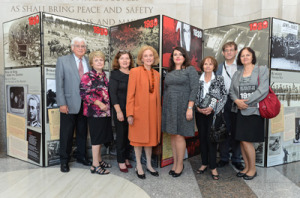 Mr. James Person, Deputy Director of the Wilson Center’s History and Public Policy Program, described the depth of the Center’s documentary holdings about Poland for the years 1939-1989, including such items as minutes of Soviet and Polish Politburo meetings at crucial times or records about North Korean orphans brought to Poland following the Korean War.  He invited everyone to make use of them, noting that most of the documents are available on-line through the Wilson Center’s Cold War History Project.

President of the PAC Washington Metro Area Division, Dr. Susanne Lotarski, linked the actions of the Polish American Congress to the events displayed in the exhibit, citing the issues on which the PAC lobbied the U.S. government and the U.S. legislation and programs the PAC was able to secure on behalf of Polish displaced persons, veterans, immigrants, and on behalf of Poland itself both before and after 1989.

Minister Counselor Maciej Pisarski, Deputy Chief of Mission of the Embassy of the Republic of Poland in Washington, thanked both the PAC and the Wilson Center for their work in broadening Americans’ understanding of Poland.  Mr. Pisarski highlighted the many past and ongoing contributions to the well-being of Poland and Polish Americans by the Polish American Congress, which he called the foremost Polish-American organization of national standing. 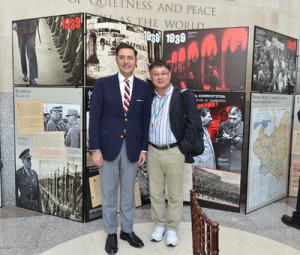 Before and after the program, visitors studied the 34 large panels of the exhibit, enjoyed wine and hors d’oeuvres, and mingled with other guests, who included Wilson Center Fellows, U.S. government officials including diplomats preparing for assignment to Poland, representatives of business, media, think tanks and universities, members of the PAC Washington Metro Division, and friends from other Polonia and Central European ethnic organizations.

In photo: Wilson Center Visiting Research Professor from China, standing with James Person, asked to have his visit documented.

Complimentary materials from the sponsoring organizations were available for visitors to take home for further study. These included a comprehensive bilingual catalogue of the exhibit, as well as a game about Monte Casino, produced by the Institute of National Remembrance. Polish American Congress materials featured the PAC’s mission and accomplishments, as well as membership information and applications. The Wilson Center offered several of its research publications on Polish subjects.

The exhibit’s location in the Ronald Reagan International Trade and Culture Center, the hub where tourists, federal workers, businesses and trade organizations congregate, ensured a steady stream of visitors taking a short immersion in Poland’s recent history throughout the exhibit’s ten day run.

(Editor’s Note: This commendation to Ms. Lotarski was sent in by email:)
“Thank you for the excellent work organizing and presenting the “From War to Victory” exhibit.  I had not previously seen most of the photographs and illustrations, and I also learned many facts that I had not known before.  Congratulations on an informative exhibit.

Pictures from the exhibition and the opening reception may be seen on our Facebook page at:

For questions or further information about the exhibit, please contact Justyna Swica or Susanne Lotarski by e-mail at pacwashmetro@pacwashmetrodiv.org