DETROIT–  A spirited and large crowd enjoyed ESPN’s Dick Vitale as he addressed the present day Detroit Mercy Titan supporters.  His 1976-77 team was honored in a 40th reunion celebration.  The pep-band kept the iconic field-house and supporters, Calihan Hall, loud and energized.  Vitale said in typical and enthusiastic Vitale-speak, “In 1977, we had all of Detroit in the palm of our hands….baby.” 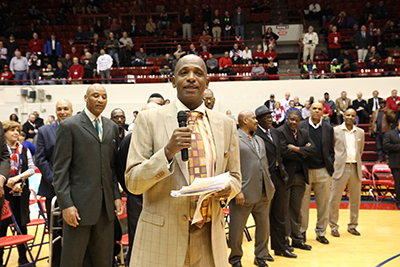 Former Coach Vitale along with assistant Smokey Gaines had tremendous success that year, going 25-4.  Included in their NCAA Tournament season was a 21 game win-streak.  Not to be forgotten was a victory on the road over eventual NCAA champion Marquette.  Marquette had only two losses that season.  On this evening also, teammate Terry Duerod had his # 42 jersey retired.  Duerod, a retired Detroit Firefighter, had plenty of DFD support at the game.  He was also joined by Titan teammates John Long, Dennis Boyd, Ron Bostick, Wilbert McCormick and the most of the 1976-77 squad for the reunion weekend.
In photo: Terry Duerod thanks the crowd as his # 42 jersey was retired at Calihan Hall on the campus of the University of Detroit Mercy. Photo supplied by the UDM Sports Communication Dept. (Dick Vitale was born in Passaic, N.J.)

Junior John Long led the team in scoring (20.3) for the third straight season.  At season’s end, Terry Tyler was voted the team’s “Most Outstanding Player,” and Long received the “Most Valuable Player” Award and Boyd was named the “Top Defender.”

In the Horizon League rivalry game, Oakland ran off to a 52-34 first-half lead and stopped an end of the game rally by Detroit Mercy to take a 89-80 victory at Calihan Hall.  The Golden Grizzlies got 23 from both Jalen Hayes and Sherron Dorsey-Walker and Martez Walker added 20 in a Horizon League contest.

Junior forward Jaleel Hogan and sophomore guard Josh McFolley each had 20-point nights for the Titans (6-19).  Detroit Mercy would get to within eight points, 88-80, with 39 seconds left after McFolley converted on all three free throws after being fouled on a 3-point shot.

The Horizon League has branded their playoffs as ‘Motor City Madness’ and the tournament will take place at Joe Louis Arena, March 3-7, in Detroit.  Joe Louis Arena is owned by the City of Detroit.  It is operated by Olympia Entertainment, a Detroit-based company owned by entrepreneurs Michael and Marian Ilitch.  They are one of the country’s most dynamic, innovative and diverse sports and entertainment enterprises.

In conjunction and as part of the tournament festivities, the Horizon League and Olympia Entertainment will host a special enrichment and educational event.  The Champions Brunch at Joe Louis Arena on Tuesday, March 7, at 10:00 a.m., will feature Green Bay Director of Athletics Mary Ellen Gillespie.  She will be joined by former three-time WNBA Champion and four-time All Star, Cheryl Ford.  They will discuss their experiences in athletics and how the journey relates to the future of intercollegiate athletics.  The legacy event is open to the public.  The brunch will also feature closing remarks from Horizon League Deputy Commissioner Julie Roe Lach.