ROOSEVELT ISLAND, NY – Congresswoman Carolyn B. Maloney (NY-12) led a massive Independence Rally recently at Four Freedoms Park, which was attended by many Ukrainian New Yorkers and organizations. The Ukrainian community joined Congresswoman Maloney on the eve of the March 16 referendum and called for the cancellation of the so-called vote to join the Russian Federation, and for Russian forces to leave Crimea. 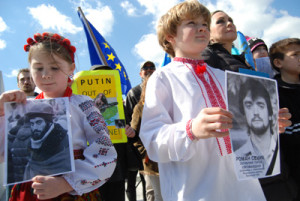 The Congresswoman and the demonstrators denounced Russia’s actions and noted that, in addition to violating Ukraine’s constitution and the Budapest Memorandum, the latter of which specifically requires Russia to respect Ukraine’s sovereignty, they ran counter to the spirit of the Four Freedoms – freedom of speech, freedom of religion, freedom from want and freedom from fear – the principals to which this park is dedicated, and which President Roosevelt said should be the right of people “everywhere in the world.”

“This so-called referendum is nothing more than thinly veiled Russian imperialism. Russia is putting lipstick on a pig by arguing that Crimeans should be able to vote to join the Russian Federation. This is not democracy; this is an illegal invasion and occupation of a sovereign nation. It violates Ukrainian law and international law. It also runs afoul of the spirit of the Four Freedoms that President Roosevelt famously articulated; the freedoms that this park honors, and the freedoms that President Roosevelt likely conveyed at the storied Yalta Conference, in Crimea, when the Russians agreed to join the United Nations. I urge the Russian-controlled Crimean local government to abide by Ukrainian and international laws, and abandon this faux referendum,” said Congresswoman Carolyn B. Maloney (NY-12). 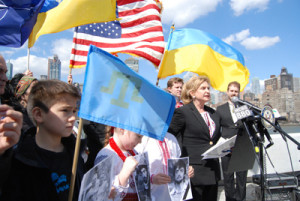