NEW JERSEY – The NJ Devils and the Prudential Center recently held a “Sleep Out ” to raise money for Covenant House. Covenant House, an institution founded in 1972 by Father Bruce Ritter in NYC to help get teen prostitutes off the streets, has grown into one of the largest advocates for the Homeless and People of Need in America.

The Franciscan Friar began his mission taking troubled teens off the cruel streets of NYC; those who had no one to turn to and no were to stay. Father Bruce Ritter who passed away in 1999 left behind a network of Safe Houses that men and women of all ages could find shelter when they faced despair and knew that they would not be turned away.

Over the past few years, the owners of the Devils and Prudential Center lead by Scott O’Neil and Hugh Weber have supported the City of Newark and surrounding areas in matters dealing with economic and social concerns. Recently, after a Devils home game, the Devils and Prudential Center parred with Covenant House of Newark to help raise donations and awareness of the homelessness. Donors raised the $140,000 and got the right to sleep in Champion Plaza overnight.

Following the win over Tampa Bay, the donors gathered inside the Rock for an assembly directed by representatives of Covenant House to receive their sleeping gear before going outside for the evening sleepover on the Newark Plaza. Devils Left Winger Mikes Wood addressed the charitable audience before they ventured outdoors for the Sleep Out. Miles told me when he heard about the event to help raise money for Covenant House, he volunteered to be a part of this worthy cause. “When I come to work, I see the poor and less fortunate, and I wanted to be part of this important way to raise money and awareness for the work that Covenant House does ,” expressed Wood. 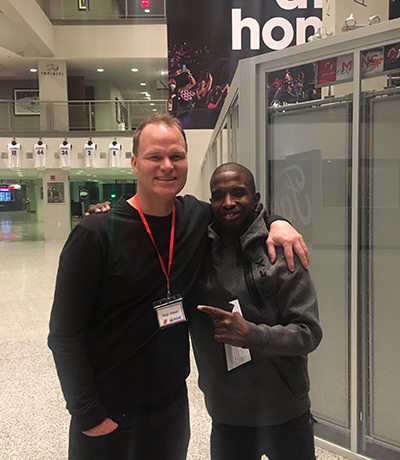 Photo by Jim Dombrowski. Prudential Center Executive Hugh Weber with Brett Heard. Brett (on right) is a fine example of the successful work of Covenant House as Brett was homeless and Covenant House helped turn his life around . He works at The Prudential Center which has done much to improve the City of Newark and surrounding areas with many community based programs. 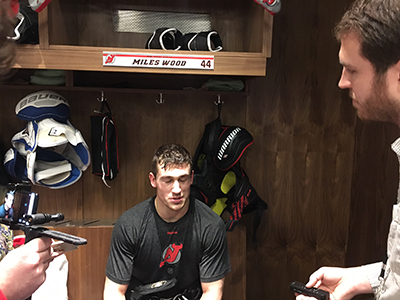 Devils Left Winger Miles Wood lent his support to the Joint Fund Raiser between Covenant House and Prudential Center . Miles told me that when he learned of the Fund Raiser he asked what he could volunteer to do to help make the event a success. Miles addressed the Donors before they Sleep Over. 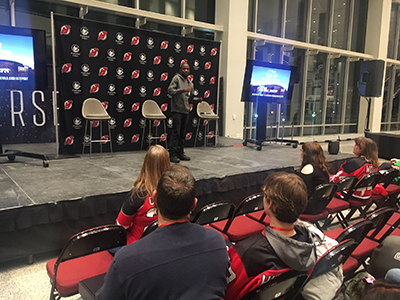 Former Homeless Brett Heard who was taken in by Covenant House addresses the Sleep Out Crowd inside The Rock prior to their Sleep Out on Championship Plaza. Brett is currently a proud employee of The Rock.