The Mexican Border In Texas

All the talk over the last few years has been about the porous US/Mexican border and the amount of illegals who cross the border into America. Having decided to travel across the country to cover the New Jersey Devils and their first ever trip to Las Vegas,  I decided to make it a road trip which would allow for other assignments over the two weeks that I would be on the road.

PHOTO: The Open Border between Texas and Mexico.

Heading East from California, I decided on the Southern route through Arizona and New Mexico which took me into Texas … the longest border with Mexico. The small town of Fort Hancock seemed like a good “Border Town” to see the Mexican Border and the Rio Grande River. 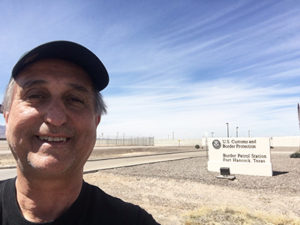 While searching for the Border, I saw a sign which read Port of Entry so I drove in that direction. I found two Border Patrol Officers who I asked if they could take me to the Rio Grande which separates the USA & Mexico. I followed the officers on a road along the border for several miles until they took me to a path which lead to the Rio Grande. (In photo: Jim Dombrowski at Point of Entry at Fort Hancock, Texas)

When we started our drive, there was a wall but, it quickly disappeared to an open border with nothing separating the two countries except a river. The river is only about a foot deep and mostly filled with mud and very little water. My observation was that the road to drive into Mexico which is labeled as a point of entry has a fence which runs a few thousand feet and a Customs Check Point.

The two Border Patrol Officers who gave this Post Eagle reporter a tour of the open border between Texas and Mexico. I was very appreciative of their time and the opportunity to see the Border away from the usual check point that the road allows. Thank you Officers! 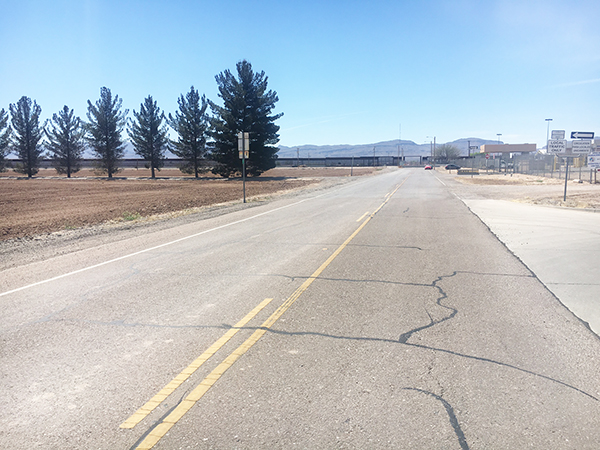 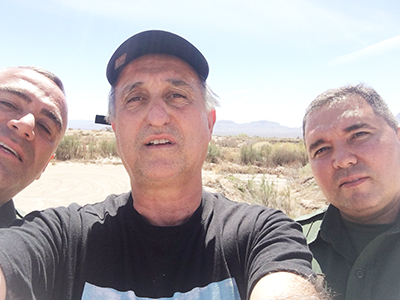