The Honeymooners
A Family Musical
With A Solid Theme

NEW JERSEY – The Paper Mill Playhouse has once again staged a new musical which is also an original production based on the legendary 50’s television sitcom “The Honeymooners .”   Mark Hoebee and Todd Schmidt are the driving force along with an excellent team to back them up at the famed Paper Mill Playhouse in Millburn, NJ which has quickly become the proving grounds for Broadway bound productions. As the recipient of the 2016 Regional Theatre Tony Award, theatre producers and directors have found a home to stage their shows for 30 day runs to get reviews and audience reactions in order to prepare for the possible jump to Broadway. I can definitively see this production playing well on Broadway!  The Honeymooners runs through October 29th.

In photo: Joyce Randolph (seated) with a fan. The original Trixie of the Honeymooners!

Chatting with writer Bill Nuss, I asked him how much thought went into reaching an audience who had either never seen one of the Honeymooners 39 episodes or even knew it was a classic sitcom. Nuss quickly replied that it was a consideration, but the first act was a way to reintroduce the audience or educate the theatre-goers to the Honeymooners. I agree. The second act is much more free standing with themes never before explored by the original classic television show.

Making a surprise appearance at the Press Opening was the original Trixie, Joyce Randolph,   who at 92 looked glamorous and spry, and very happy with the stage production. “I like the show very much,” Joyce noted.  Randolph was born in Detroit and I asked her how her career got started, With a smile she quickly said, “At 18, I boarded a train to Hollywood with my girlfriend and never looked back.” Of the 4 stars who made this sitcom a legendary show, she is the only one still alive. She really enjoyed being invited to Manhattan to be part of the pre-production phase to ensure the stage version would be a compliment to the original TV show.

The Honeymooners runs through Oct. 29. 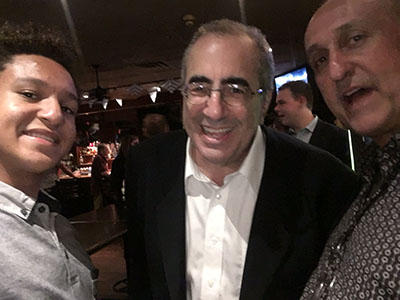