“The Bandstand” – A Smashing Musical

Jad Dombrowski, son of Post Eagle critic James Dombrowski, chatting with Laura Osnes, star of “The Bandstand”; a smashing musical which was recently performed at the Paper Mill Playhouse in Milburn, NJ. 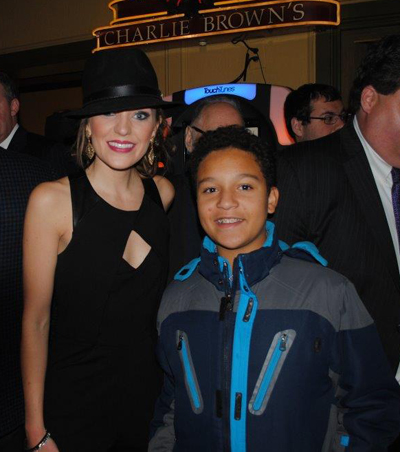 The production of “The Bandstand”, without hesitation, is the best original production I’ve seen in a long time.  The team of Richard Oberacker (composing the music) and Robert Taylor (Taylor and Oberacker writing the book and lyrics) have produced a smashing success.  The onslaught of revivals often lead us to believe that the original productions cannot come to fruition.

“The Bandstand ” starring Laura Osnes who plays Julia Trojan and Corey Cott (Danny Novitski) perform to a theme based on the casualties of war – those who come home alive but harbor the lasting effects of  the battlefield.  The contest to win a place in a Hollywood movie with your band during the post WWII era is commendable and easily understood, but the portrayal of the band members who suffer the lingering effects of war ring true today with the scars of American soldiers in 2015.