On Wednesday,  March 14, 2018, one month after the fatal killing of 17 people which included 14 students and 3 staff members of Marjory Stoneman Douglas High School in Parkland, Florida, a national Walk Out occurred across America in support of lessening gun violence in schools.

The work of the students of Parkland, Florida has been unprecedented since the Columbine shootings set in motion an unfortunate occurrence of school shootings never before seen in America. The articulate nature of the Parkland students to spread the message of  “never again” in a southern state with Gun Laws that are for the most part Gun Friendly has spread the message that something practical has to be done to help curb and end these senseless shootings.

The fact that the shooter was known by the police for actions that were not proper, which included killing pets and tips that were called in to the FBI, have made the cause for action for many reasons that go beyond the usual discussion of gun control.  Other issues to be addressed include better coordination among law enforcement and mental health issues of all students and citizens when it comes to gun ownership. 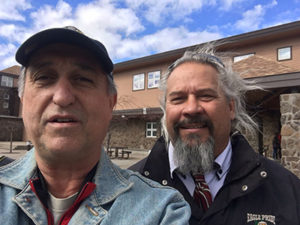 As the National Reporter for the Post Eagle, a newspaper founded in 1964, I was on my cross country journey to cover the Western games of the NJ Devils beginning in Las Vegas on that Wednesday – March 14. (This was the Devils first game ever in Las Vegas. The NJ Devils beat the Golden Knights 8-3 in front of the largest crowd in their Inaugural Season … 18420.)

Being in Flagstaff, Arizona which is the gateway to the Grand Canyon, I went over to the high school that Wednesday morning and witnessed the student driven walk out against Gun Violence occurring at 10 am across America. I saw hundreds of students – with mountains in the background of their football field – take 17 minutes to support this cause. Principal Cullens, on the job for 18 years at this picturesque high school (only a few miles from one of the world’s most majestic natural site), made it very clear that the Walk Out was student driven. Teachers looked on; the assembly was orderly with a few quick speeches and then the students marched back into the school. A handful of police watched from afar with a few spectators also witnessing the nationwide assembly of high school students against Gun Violence.

(In photo: Principal Cullens – in cart – overseeing the walk out) 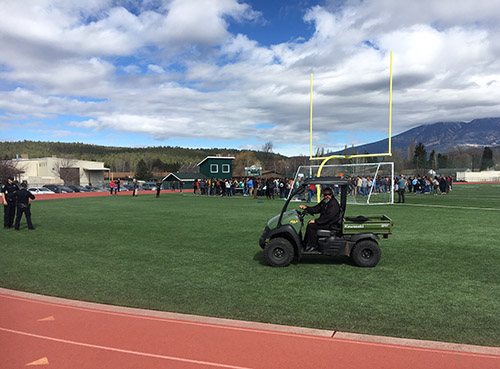 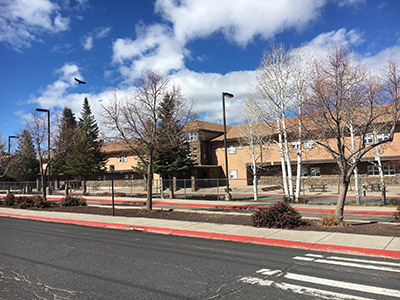