BALTIMORE, Md. – There was quite a celebration here on New Year’s Eve, 2014 – The 100th Birthday of Bronislawa (“Bronia”) Rynkowski. She was born in Baltimore on New Year’s Eve of December 31, 1914 to parents Stanislaw and Katarzyna Tomaszewski. In keeping with the Polish Catholic large-family-norm of the bygone era, her siblings were Adam, Ewa, Czeslaw, Stefan, Janina and Kazimierz. Bronia’s mature and loving marriage to Adam Rynkowski in 1966 ended with his passing 25 years later in 1991 at age 99.

Over 40 family members and guests attended the early afternoon centennial celebration at the Polish National Alliance, Council 21 petite banquet room. Everyone sang the traditional celebratory “Sto Lat”! (“100 Years”!) with a special emphasis on this auspicious birthday occasion. Blessings and prayers were given in Polish and English.  Many toasts were made followed by a recounting of Bronia’s long and well-lived years in the forms of spoken words, recalled vignettes, photo albums, and narrated projected photos. A Papal Blessing was received from Pope Francis, as well as greetings from U.S. Senator Barbara Mikulski and other government officials.

After a large buffet featuring tempting Polish cuisine, dancing ensued to the music and crooning of a Polish-orientated accordion duo. And a radiant Bronia was surrounded by everyone dancing a circle around her table, with the merrymakers often stopping to bestow kisses on her cheeks.

With the hale and hearty Bronia Rynkowski now entering the second century of her life in 2015 we must now happily toast her with “Dwiescie Lat”! (“200 Hundred Years”!). 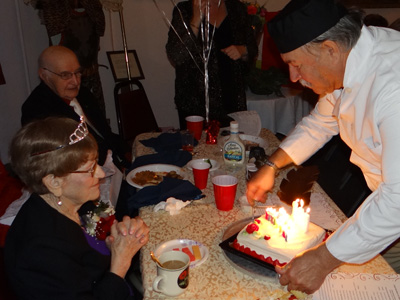