Randolph, MA –  Stanley B. Sinitski, 93, retired musician, drummer, founder and leader of the Modernistics Orchestra for over 63 years, passed away on Monday, January 26, 2015 at Winchester Hospital. 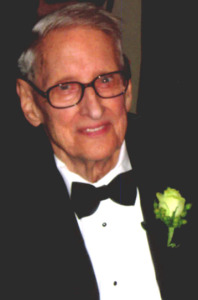 Born in South Boston on March 28, 1921, son of Vincent and Alice (Postawska) Sinitski, formerly of Lynn, Cambridge and Chelsea.  Brother of the late John Sinitski of Lynn. He was predeceased by his loving wife of fifty years, Jean (Szklar) and his dear friend, Bridget (Robak) Bubencik.

Stanley was a life member of the Polish Falcons Nest 48 and Polish American Veterans Post 13 of Chelsea, a member of Pulaski Post American Legion, Knights of Columbus, and the First Seniors of St. Mary’s and St. Bernadette’s in Randolph and St. Mary’s of South Boston.   He graduated from St. Michael’s elementary school of Lynn and Rindge Tech High School in Cambridge, class of1939.  A veteran of WWII, he was a Navy AMM2/c serving in the North Pacific and was awarded 3 medals.  He was a machinist, mechanic and quality control inspector employed through the years by Boston Woven Hose, Ace Electronics, TRG, Control Data, and Alpha Industries.

Stanley’s greatest love in life was Polka music. He founded the Modernistics Orchestra in 1939. In the early years the band could be heard broadcasting live on the radio. For the next 63 years, anywhere people gathered to have a good time, weddings, dances, picnics and parties, the Modernistics were on the bandstand playing that happy, upbeat Polka music. In the band’s TV debut on PBS Channel 44, Stanley was honored to be introduced as “The Lawrence Welk of Boston”. In 2013, he was presented a lifetime achievement award for his years of preforming and promoting Polka music throughout New England by the German Cultural Society in Pawtucket RI.

His Funeral will begin from the Frank A. Welsh & Sons Funeral Home 718 Broadway CHELSEA on Tuesday February 3rd, at 8:30 A.M. Followed by a Funeral Mass at St. Stanislaus Church 163 Chestnut St. Chelsea at 9:30 A.M. Services will conclude with Interment at Holy Cross Cemetery, Malden. Relatives and friends are most kindly invited to attend. Visiting hours will be held at the Welsh Funeral Home on Sunday February 1st 1:00-5:00 PM. Funeral Home fully handicap accessible, ample parking opposite Funeral Home.