Rzeszow 2014 – Festival Of Many Colors

As any city, at the center of it, you will find its people and its heart.

On that sunny afternoon July 27th, 2014, I boarded the “PolskiBus” in Krakow and arrived in Rzeszow. Few clouds covered the sky as I approached the “rynek” or city square, and all I saw was moving colors and all I heard were the sounds of the motherland. It was visible and audible from a far.

This was Rzeszow’s 16th folk dancing festival which took place from July 23rd through the 29th. This event occurs every three years. The festival is composed of concerts performed by international Polish folk dance groups and, this year, 14 nations took part including the United States, Canada, Great Britain, Russia and Ukraine. 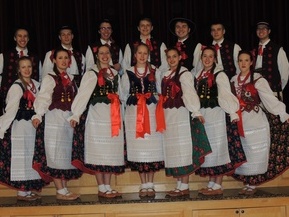 Rzeszow’s Festival takes pride in its international participation having had 16 organized festivals to date. Over the years, it has touched 193 dance groups in 23 countries throughout the four continents at least once. Throughout the festival’s existence, the USA has brought the most participants (40). However, in this year’s festival, Canada had the most participants, having brought nine groups to the festival, including Windsor’s “Tatry” and “Cracovia” from London, Ontario. Right behind was the United States with eight groups, including Detroit’s own “Polanie”.

On the first day of the festival, a parade or “korowod” was held, with all the participants walking through the streets of Rzeszow in colorful traditional Polish costumes like “Krakowiacy”, “Kurpiowski” etc. The festival was made up of five concerts, including two performances free of charge in the town’s square or “rynek”, and two paying concerts at the local sports center PODPROMIE.

On Sunday, July 27th, in spite of light rain, the day started with a Mass, followed by a concert in the rynek. It brought together crowds of young and old, from near and far, and all eyes were on the stage. While the outdoor ones were more free spirited and somewhat served as introducing the groups to the public, the paying concerts were a whole new level of magic. Two big “paying” concerts were held the last two days of the festival -it was like a “Grand Finale”, a whole new caliber; one where the groups performed dances from their home country, the other  a finale concert which included all participants, along with a beautiful closing ceremony. They were both close to sell out!

The inside of the big sized, modern sports center PODPROMIE, where last two concerts took place, gave off an olympics vibe but without the bitter competitive allure among athletes. There was still sweat and dedication, but there was more good sportsmanship than in most athletics. The PODPROMIE was taken up by the dance groups for both final concerts where they organized other dances and moving coordination throughout the concerts, while holding their banner of the dance groups name. Both concerts opened with selected groups performing the Polonez – a beautiful, calming, elegant Polish dance, and closed with another dance number. People who came to see the performers were so enthusiastic and applauded each dance, sometimes with a loud “bravo”.

Lots of locals had a positive feeling about the invasion of young “Polonia”. First time concert goer Ryszard Sziler, an artist from nearby Kolbuszowa, was charmed by the performance of Polonia’s youth from all over the world. “The choreography, stage decorations at the PODPROMIE, and the professional level of these young Polonia dancers were breathtaking,” said Ryszard. He and his wife Ewa Czartoryska-Sziler promised themselves not to miss future festival concerts!

At the same time, Rzeszow also hosts a rigorous Folkloric Choreography program. After finishing Rzeszow’s choreography course this year, official choreographer and Windsor’s “Tatry” dancer, Patrycja Mroz, claims her vision on the art has been altered. “There’s so much more detail that I pay attention to now. It’s amazing how Polish folklore is cherished and practiced through dance while keeping to tradition.

“Not only did I get a chance to experience the Polish culture, but I was also able to meet people from all over the world and see dances from their native countries,” says Emily Lemmon from Tatry Song and Dance Ensemble in Windsor, a first time festival goer. “The atmosphere was so exciting, and it was fantastic being surrounded by so many people who share the same love for Polish folk dancing.”

“People of Rzeszow are fantastic! We had a such a warm welcome, we will never forget it!”, added another participant of Rzeszow’s Festival.

Let’s also remember the Stowarzyszenie Wsponota Polska, Rzeszow City Hall, Ministry of Foreign Affair and Ministry of Culture, and National Heritage Festival organizers, who did a fantastic job preparing this unique experience event for hundreds of dancers; it went smooth and without “glitches”.

Last, but not least, this year festival could not have been possible without its sponsors: Rzeszow Politechnque, Kia Multitruck, Medical Centre “Medyk”, OPTeam S.A. and many others, To all of them, this year’s festival participants say “Big Thanks”.

If you visited this south-eastern town of Rzeszow as festival participants during the last week of July 2014, you would have felt the togetherness; and the pride of our Polish heritage was so overpowering that it would make you even more patriotic.

Of course, every good thing must come to an end. The festival was a place for talent to be showcased and memories to be made, and as long as there is Polonia’s spirit and dedication to its culture and art, they will never let these celebrations die. Another three years and it will come, as it always does, in full circle.