(NEW YORK) — To mark the 100th anniversary of U.S. participation in World War I (April 1917 to November 2018), the Roosevelt House Public Policy Institute at Hunter College will mount a new exhibit, World War I and the Roosevelts: Franklin and Eleanor, Family and Friends.

The exhibit features 17 rare, nearly mint condition American and European military recruitment and fundraising posters prepared by leading artists of the day who donated their services to the New York-based Committee on Public Information.  On view is the work of Howard Chandler Christy, James Montgomery Flagg, Francis and Joseph Leyendecker, and Joseph Pennell, among others. They were among the 300 illustrators who contributed to the war effort with enlistment posters for the Army, Navy, and Marines, for Liberty Bond posters to pay for the war, and for Red Cross appeals for money and clothing. (The dark and violent imagery of two fierce Italian posters reflects the suffering of that nation at the hands of the Germans and Austrians before the Americans entered the war.) 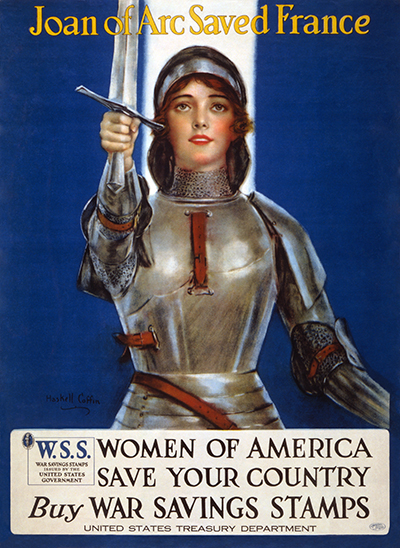 These original posters are supplemented with images of the Roosevelts, including Franklin Delano Roosevelt’s visit to the battlegrounds and damaged towns of France in the summer of 1918, and of Eleanor Roosevelt’s Red Cross work.  In addition, exhibit cases display original magazines with cover art by Flagg and Norman Rockwell along with Liberty Bond drive buttons, books about the war, and other wartime memorabilia. The story of one doughboy from the Bronx, Private David Moran, is told through original photographs, letters, and military insignia. He is representative of the men who served in the American forces and saved Europe from German domination. The show concludes with a sample of New York memorials to the 116,000 Americans who lost their lives in the conflict.

The exhibition and its programs are made possible by generous grants from the Stepanski Family Charitable Trust and the Susan and Elihu Rose Foundation.

“Less than a decade after Franklin and Eleanor moved into what we now call Roosevelt House, they relocated to Washington to help fight the war meant to end all wars.  Their tireless work has remained something of a historical footnote, so we are proud to be recalling their service—along with that of other members of their extended family—on the 100th anniversary of U. S. entry into that global conflict,” said Jennifer J. Raab, President of Hunter College.  “Our gratitude goes to the generous funders who made this show possible, and to the institutions who have lent amazing artworks. We are delighted that the public and our students will be able to learn valuable lessons from America’s onetime determination to ‘make the world safe for democracy,’ and to take inspiration from the commitment of one of its most public-spirited families: the Roosevelts.” 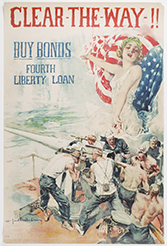 The opening program inaugurating the exhibit was held on October 19th. It hosted a talk by former Ambassador William vanden Heuvel, whose leadership over the last two decades has benefitted Roosevelt House as well as the Franklin D. Roosevelt Presidential Library at Hyde Park, and the FDR. Four Freedoms Park on Roosevelt Island.  Ambassador vanden Heuvel spoke on World War I: The Hero and the Conscience—“Wild Bill” Donovan and Roger Baldwin—chronicling and contrasting the lives of a military hero and a conscientious objector, both of whom young vanden Heuvel knew personally. 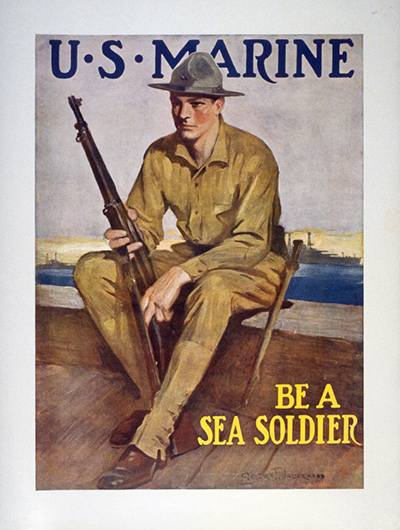 World War I and the Roosevelts draws from the rich collections of the Hudson River Museum, Yonkers, NY and the Museum of the City of New York, with additional material provided by The Franklin D. Roosevelt Presidential Library at Hyde Park, Liberty Hall Museum in Union, NJ, the archives of Roosevelt House, and private collections.

One century has passed since the United States entered World War I on April 6, 1917.  In Europe, the war had started in August 1914, millions had already died, and a stalemate prevailed.  Germany’s resumption of unrestricted submarine attacks taking American lives, and its nefarious attempt to engage Mexico in a war with the U.S., finally compelled President Woodrow Wilson to ask Congress for a declaration of war to help the Allies, chiefly England and France, defeat the Germans. Wilson declared: “The world must be made safe for democracy.” This vision of moral leadership on the world stage would inform American foreign policy for another 100 years.

Of the many commemorative events and exhibits taking place in 2017-2018 about America’s engagement in this terrible conflict, Roosevelt House has a unique perspective on the history of the era. In 1913, Franklin Delano Roosevelt and Eleanor Roosevelt moved from their home on 65th Street to Washington DC to serve the nation. As Assistant Secretary of the Navy, Franklin was on the front lines of policy and operations during the war. The lessons he learned about prosecuting and financing a war, and the terrible toll it took in lives, would remain with him the rest of his life and influence his decisions during World War II.

Eleanor Roosevelt became a Red Cross volunteer in Washington, inspiring others and acquiring the extraordinary emotional skills she would deploy during World War II and in later human rights work. She visited injured soldiers at the local military hospitals, and sought additional funding to improve their care and assist their families.  In January 1919, she accompanied FDR to Europe and saw the wreckage of the French countryside.  Her experiences there and in Washington led her to support President Wilson’s League of Nations, as did Franklin, and seek new ideas for peace.

In addition, at least 18 other members of the extended Roosevelt family were deeply involved with the war, perhaps more than any other American family. Among them were Teddy Roosevelt’s four sons and daughter and son-in-law, Eleanor’s brother, and numerous cousins, aunts and uncles, nieces and nephews.  The war also drew upon the talents of five past and future presidents, and a number of men who would later serve in the cabinet of future President Roosevelt and advise him during a second world conflagration.  The Great War of 1914-18 reshaped Europe and shaped the man, Franklin Delano Roosevelt, who would later rescue it again from German aggression.

About Hunter College:
Hunter College, located in the heart of Manhattan, is the largest college in the City University of New York (CUNY) system. Founded in 1870, it is also one of the oldest public colleges in the country and famous for the diversity of its student body, which is as diverse as New York City itself. Most Hunter students are the first in their families to attend college and many go on to top professional and graduate programs, winning Fulbright scholarships, Mellon fellowships, National Institutes of Health grants, and other competitive honors. More than 23,000 students currently attend Hunter, pursuing undergraduate and graduate degrees in more than 170 areas of study.  The 1,700 full- and part-time members of Hunter’s faculty are unparalleled. They receive prestigious national grants, contribute to the world’s leading academic journals, and play major roles in cutting-edge research. They are fighting cancer, formulating public policy, expanding our culture, enhancing technology, and more.