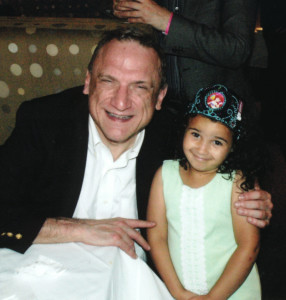 If you have little children and you feel that the theatre is a venue that will help bring a sense of culture and diversity into their lives then “The Little Mermaid” presently running at the Paper Mill Playhouse in Milburn, New Jersey has the perfect show to see.  Running until June 30th, the Disney movie which mesmerizes audiences with its spectacular colors and beautiful songs that fill the silver screen has been set on stage with great taste and flying characters which hold the audience’s attention irregardless of age.

In photo on right: Ron Wisniski who plays the role of Grimsby in “The Little Mermaid” takes a pose with Talia Dombrowski, age 5, who helped her father James review the Disney inspired play that debuted as a movie. It was Talia’s first theatre experience and she loved the show. Photo by James Dombrowski

New Jersey’s premiere intimate setting for theatre productions is without a doubt the Paper Mill Playhouse. The plaza with a running brook and a goldfish pond to get the attention of children relaxes the audience before they enter the theatre for a first time experience that will last a lifetime.  The opening night audience was full of children as young as 2 years old and I can report that the attention of the children to the stage was remarkable.  As I sat in my seat with my 5 year old daughter, doing my review, I was a little surprised how quiet the theatre was for the 2½ hour production, considering the audience of children and adults.  “The Little Mermaid” is a must see and perfect for the family!

Everyone loves a Disney Movie and  the love story of Ariel and Prince Eric brings a tear to your eye. The adaptation to the stage was marvelous and easy to follow.  The costumes were colorful and the songs were enchanting with classic renditions of “Part of Your World” sung by Jessica Grove (Ariel), “Under the Sea” and “Kiss the Girl” sung by Alan Mingo, Jr. (Sebastian) highlighting the production.

The lighting design by Charlie Morrison and scenic design by Kenneth Foy give the audience a perception of a movie with live characters.  Paul Rubin’s flying choreography is outstanding.  Jessica Grove’s (Ariel) singing and flying makes you wonder how can she do that.  I spoke to Jessica about her singing and flying and she explained,” it took a lot a practice and rehearsal to learn how to sing and fly. You have to be relaxed.  It is a lot of fun.”

Adding his Polish heritage to the cast is the comedy that is shown by Grimsby played by Ron Wisniski.  As the captain of the ship and the person who is suppose to direct the Prince in a royal manner that will lead to him becoming the King; Grimsby has an impossible task,  considering the Prince’s desire to hang with the sailors because of his love for  the sea.

Wisniski with an original spelling of Wisniewski hails from Pittsburgh, Pennsylvania where he attended South Park High School (Class of 1975) in Library, Pennsylvania and then graduated from the University of Pittsburgh (Class of 1979).  Wisniski will continue on in his role as Grimsby when the production concludes at the Paper Mill on June 30th, moving onto the Pittsburgh Civic Light Opera House which will show “The Little Mermaid” from July 9 to the 21st. Then Ron goes to Kansas City Starlight Theatre in Mo. from July 23rd to the 28th.   A busy summer for Ron ends in Sacramento, California at the Sacramento Music Circus with the production of “King and I” from Aug. 6th to the 11th where he plays Captain Orton.

Ron left the Pittsburgh area in 1980 to begin a Broadway career and moved to New York City where he lives today.  His path has placed him on many stages across the country with roles in National Touring Companies, Regional Companies, and New York area productions; but unfortunately Broadway has not happened yet.

“I have always desired to be on the Broadway stage. Unfortunately when it looked like a production on Broadway was going to happen and I was to get a part, it fell through,” Wisniski sadly explained. “But I will keep trying for someday I want to be on Broadway,” noted Ron.

Much to his credit Wisniski has been in over 150 plays with the most acclaimed being the National Tour of  “Beauty and the Beast” and “Annie.”  Ron has also been on stage with Shirley Jones and Lorenzo Lamas.

Ron is no stranger to politics. He ran for delegate to the Democratic National Convention in 1976 but lost by a few hundred votes. He also founded the South Park  Conservatory Theatre in 1977.  As a New Yorker he helped elect Hillary Clinton to the Senate and hopes to see her run for President in 2016.