Photo: Jets number three Draft Choice (number 14) Sam Darnold in the huddle as the Jets romp the Lions 48-17 to begin the season at 1-0. Darnold looked sharp in his QB debut for the Jets.

The hype was at a fever pitch as the Jets came into Cleveland at 1-1 with their number three Draft Pick QB Sam Darnold facing the winless Browns who were 0-1-1 entering week three. The Browns decided to start with QB Tyrod Taylor and sit their Number 1 Pick Baker Mayfield until head coach Hue Jackson thought he was ready.  The Browns went 0-16 in 2017 and had not won since Christmas Eve 2016 in a 1-15 season.

The Jets led with 14-3 at half-time, sacking Tyrod Taylor late in the second quarter; giving him a concussion. That brought the highly anticipated start of Baker Mayfield’s career to the Thursday Night National Broadcast. Mayfield orchestrated a second quarter ending field goal energizing the Browns team and the crowd to a fever pitch that I’ve never seen at a regular season early season game.

The Jets only managed 3 second half points while the Browns scored 18 points ending their winless streak with a 21-17 victory. The Jets failed to maintain a positive field position allowing the Browns opportunities unlike in the Detroit win where the defense and offense controlled field position.

The country and the Browns’ fans wanted to see a Mayfield debut, so Thursday Night Football benefitted. The energized Browns offense seemed to do more for the Browns better defensive play. The Jets defense played well as Mayfield played a solid rookie game, finishing 17 for 23 in passing with 201 yards. Yet the Jets had plenty of possessions but they were mostly in the Cleveland end of the field in the second half. Mayfield played well and knowing that his team wanted him on the field over Taylor. 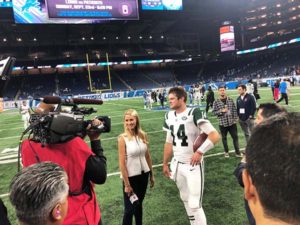 In photo: Rookie Jets QB Sam Darnold doing his first NFL post game winning Monday Night Footfall ESPN interview. Hopes ran high for the Jets with their big win in Detroit but, unfortunately for the Jets, the next three weeks brought losses with a home Met Life loss to the Dolphins and road losses to the Cleveland Browns and Jacksonville Jaguars. On Sunday, October 7, the Jets begin a three week home stand vs. the Denver Broncos.

As is often the case in the NFL, a coaches decision can be made easier by an injury. The Browns with Mayfield after 4 weeks are 1-2-1 and have been very competitive. The Jets at 1-3 began on a high note in Detroit before losing two tough games to Miami and the Browns. Both games could have been wins.

The Jaguars loss in Jacksonville was against a team which is predicted to be a Super Bowl contender. The next three weeks bring the Jets home to Met Life Stadium with contests against the Broncos, Colts & Vikings. The games are all Sundays at 1 pm: Oct. 7, 14 & 21. The 3 home ones will decide the fate of the Jets season. 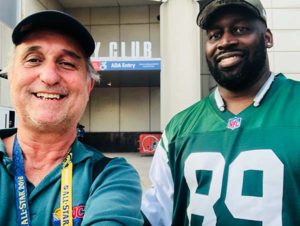 In photo on right: A selfie with Chris Herndon the father of Jets TE Chris prior to the start of the Jets-Browns Thursday Night Football matchup in Cleveland. Dad is from Atlanta and the family attends all of his son’s home and away games. 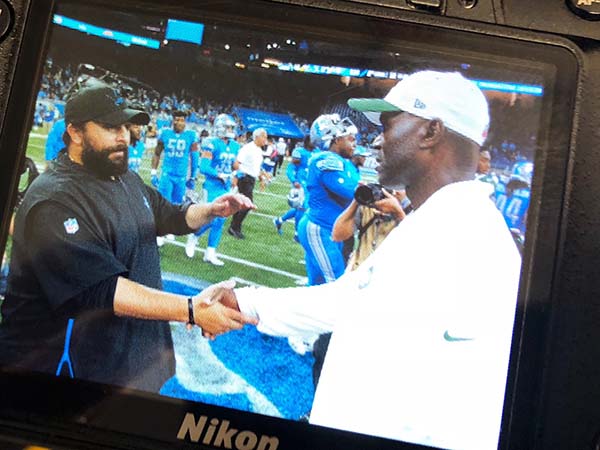 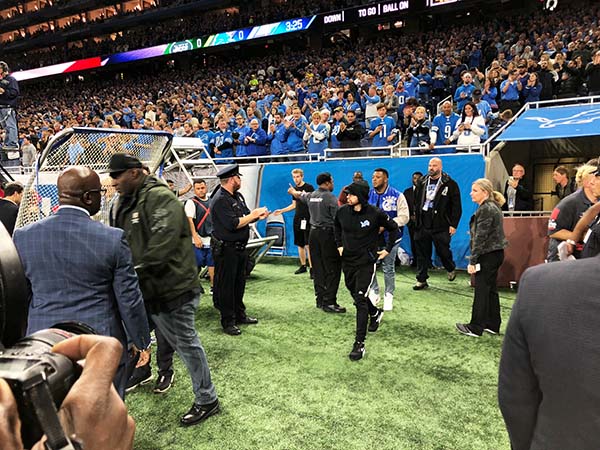 Eminem taking the field for the Coin Toss on the Opening Monday Night Football Telecast as the NY Jets visited the Detroit Lions at Ford Field. The Jets romp the Lions; beginning Rookie QB Sam Darnold’s NFL career with a win. 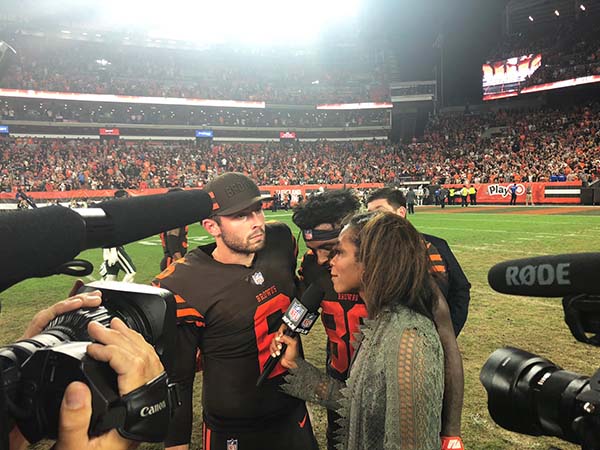 Post game interview with Number 1 Draft Pick QB Baker Mayfield and wide receiver Jarvis Landry. The Jets who are much improved this season with their highly taunted QB Sam Darnold unfortunately faced a media frenzy in Cleveland and, a National Broadcast that was decidedly pointed in the favor of the winless Browns and the debut of the number 1 Draft Pick Mayfield who has been the talk of the NFL since his Heisman Trophy College career. 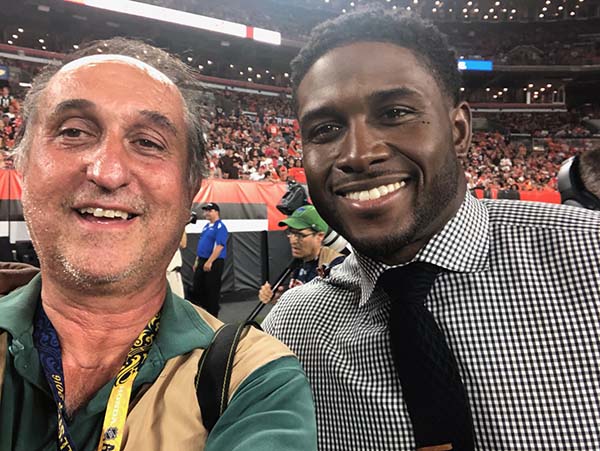