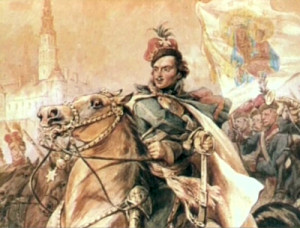 New York, NY – New York City’s Fifth Avenue will close Sunday, October 6th, 2013, from 12:00 noon to 6:00 PM as Polish-Americans join together in honor of Brigadier General Casimir Pulaski, hero of the American Revolutionary War. The parade will step off from Fifth Avenue at 35th Street at 12:30 p.m. with the Honor Guard of the New York City Police and Fire Departments leading the way up 5th Avenue to 56th Street.

The Honorable Michal Kulawik, 2013 Grand Marshal, accompanied by numerous dignitaries from New York, New Jersey and Connecticut, will lead over 150 Polish-American organizations marching up Fifth Avenue along with veterans’ organizations; members of the Boy and Girl Scouts; and, members of cultural organizations attired in colorful folk dress representing the various regions of Poland.  Local Polish communities, each led by their local Contingent Marshal, will feature 25 floats and 30 marching bands.

“The Pulaski Day Parade has been celebrated on Fifth Avenue since 1937 and is the second longest active parade in New York City history and marches rain or shine”, said General Pulaski Memorial Committee President Richard Zawisny.  “The parade’s theme is ‘March, March Polonia, March Brave Nation’, Mr. Zawisny noted.  “Polish-Americans are proud of Casimir Pulaski, known as the ‘Father of the American Calvary’, for his bravery and dedication to the cause of freedom in his own country and during the American Revolutionary War.”  Pulaski, recruited by the Marquis de Lafayette and Benjamin Franklin, received a commission as a Brigadier General from General George Washington in 1777 and was killed in battle in 1779 at the Battle of Savannah, Georgia.

To view the Parade from the reviewing stands at 40th and 41st Streets, in front of the New York Public Library, you may purchase tickets by contacting Peter J. Walentowicz at (973) 432-8841.

Prior to the parade, there will be a con-celebrated Liturgy at 9:00 AM at St. Patrick’s Cathedral, Fifth Avenue, New York. Clergy from Polish communities in the tri-state are invited to con-celebrate.  A breakfast will follow the Liturgy at the 3 West Club on 51st Street. Contact Penny Donach (718) 389-4105 for tickets and information.

On Saturday, September 28, 2013, a Gala Banquet will be held at the New York Marriott Marquis located at 1535 Broadway, New York, NY, beginning at 6:00 PM. For ticket reservations please contact Heidi Jadwiga Kopala at (908) 665-9672. A gala commemorative journal is being prepared to send greetings for the Grand Marshal Michal Kulawik, all local marshals and Miss Polonias. Those who are interested contact Michael Pajak at his email address polstarshop1@gmail.com