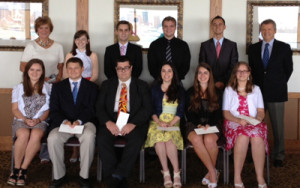 The Polish University Club of NJ recently awarded eleven scholarships for the upcoming academic year of 2013-2014.   These awards were presented at the Awards Luncheon held at The Chart House in Weehawken, NJ.

Those receiving awards were:   Natalie Falkowska, from Linden,  a senior at Seton Hall University  where she is enrolled in the Occupational Therapy program in preparation for becoming an Occupational Therapist;  John Chludzinski, from Spotswood, a senior at William Paterson University where he is a Communications Major with a concentration in Media Production; Christopher Chasse, from Verona,  a junior at Caldwell College where his major fields of study are English and History; Daphne Bienkiewicz, from Clifton, a senior at Rutgers University where her concentration is in Exercise Science and Visual Arts, Nicole Bacza,  from Wallington, a junior at Rutgers University is studying to be a Pediatric Nurse Practitioner and Andrea Brazinski, from Basking Ridge, a junior at the College of Charleston studying  Hospitality and Tourism.

Also receiving awards were: Klaudia Prusfalcon, from Caldwell, a senior at William Paterson studying English Literature and Elementary Education, Patrick Ozarek, from Clark, a senior at The College of New Jersey with a concentration in Biomedical Engineering;  Christopher Malinowski, from Bayonne, a senior at Stevens Institute of Technology studying Mechanical Engineering and Wesley Ostrzycki, from Edison, a P.A.C.E. Scholar, is a senior  at William Paterson University  in the Department of Kinesiology/ Physical Therapy.

Not present at the luncheon was Tina Burnat, from Lawrenceville, a  senior  at Rutgers University, majoring in Dietics.

The Polish University Club of New Jersey was originally conceived in 1928 by a small group of Polish-American  college graduates who formed a club known as The Polish Collegiate Club.  The Club has always had a interest in helping and inspiring the young Polonians from New Jersey. In the beginning it was for those in the lower school and then it was decided to help those at the university level.  A fund was set up, and since 1941, over 500 students have received financial support from the PUC of NJ.

Scholarship applications for the next academic year will be available in the Financial Aid Offices and online at WWW.PUCNJ.ORG after January 1, 2014.  Information on membership can also be found on the web.