SOUTH ORANGE, N.J. – February is Catholic Press Month, which began in 1931 to celebrate the importance of Catholic media in portraying the news and the story of the Church. This year, Catholic Press Month arrives on the heels of the newest “Special Journalism Issue” of The Chesterton Review – a publication of the G.K. Chesterton Institute for Faith & Culture at Seton Hall University.

“Chesterton was proud to describe himself as a journalist, and ‘journalism’ is the most accurate description of his writing,” said Fr. Ian Boyd, CSB, professor of Catholic Studies at Seton Hall and editor of The Chesterton Review. “It is appropriate, therefore, to devote a special issue of the Review to the subject of Chesterton’s journalism, and specifically to the journalism he cast in the form of parables.”

In addition, this special edition includes an article from former presidential speechwriter and Wall Street Journal columnist William McGurn, ”Speaking Truth: Religion in the Media,” which was first delivered as the Keynote Address at Seton Hall for the Institute for Communication and Religion’s inaugural event in October, 2017. (William McGurn – IN PHOTO)

In recognition of McGurn’s distinguished career as a journalist in the “Chestertonian tradition,” the G.K. Chesterton Institute will honor him with its first Journalism Award, to be presented at a ceremony in spring 2018.

The G.K. Chesterton Institute is considered the world center for Chesterton’s studies. The Institute organizes conferences and lecture series, conducts research-based activities and publishes The Chesterton Review. Chesterton’s writing showcases his ability to comment on serious matters in a style ordinary people could understand. As his work continues to be translated into different languages and studied by students and scholars alike, he continues to reach new generations of readers; the Institute was founded to promote interest in all aspects of Chesterton’s life, work, art and ideas, including his Christian apologetics. 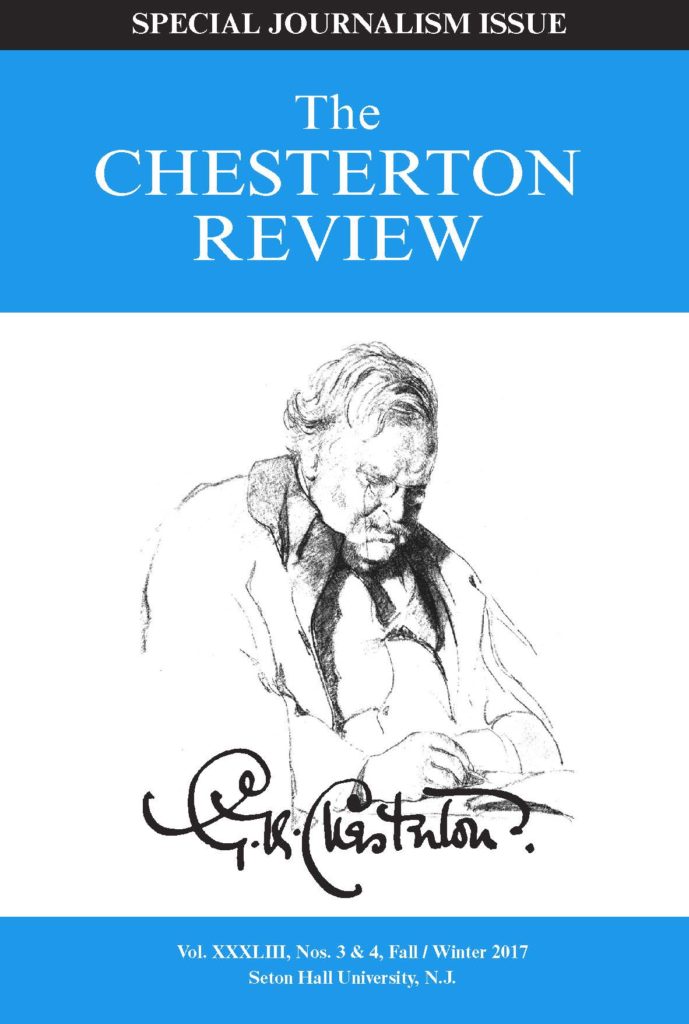 For more information about The Chesterton Review and to subscribe please visit www.pdcnet.org/chesterton

ABOUT THE CHESTERTON REVIEW

Edited by Fr. Ian Boyd, C. S. B., The Chesterton Review is the journal of the G. K. Chesterton Institute for Faith & Culture and has been widely praised for both its scholarship and for the quality of its writing.  It was founded in 1974 to promote an interest in all aspects of Chesterton’s life, work, art and ideas, including his Christian apologetics. It includes a wide range of articles not only on Chesterton himself, but on the issues close to his heart in the work of other writers and in the modern world.  It has devoted special issues to C.S. Lewis, George Bernanos, Hilaire Belloc, Maurice Baring, Christopher Dawson, Cardinal Manning, the Modernist Crisis, J.R.R. Tolkien and Fantasy Literature, Special Polish Issue. It is published twice annually (two double issues). In response to the revival of G. K. Chesterton in the Hispanic world, since 2006 The Chesterton Review publishes an annual issue in the Spanish language and since 2009 a Portuguese language supplement.  In 2010, The Chesterton Review published its first issue in French and in 2011 its first issue in Italian.

For over 150 years, Seton Hall University has been a catalyst for leadership, developing the whole student, mind, heart and spirit. Seton Hall combines the resources of a large university with the personal attention of a small liberal arts college. Its attractive suburban campus is only 14 miles by train, bus or car to New York City, with the wealth of employment, internship, cultural and entertainment opportunities the city offers. Seton Hall is a Catholic university that embraces students of all races and religions, challenging each to better the world through integrity, compassion and a commitment to serving others. For more information, see www.shu.edu