Price of Freedom Was Costly In WWII Poland 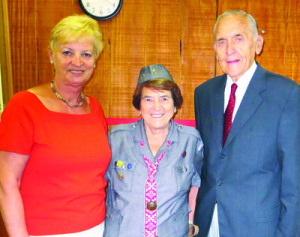 New York, N.Y… August is the month America’s Polish community annually commemorates the 1944 Warsaw Uprising (now referred to as “the Rising”) which attempted to liberate Poland’s capitol city from a five-year-long German occupation..

The Rising is often mistaken for the Warsaw Ghetto Uprising which took place a year earlier in 1943 and was limited to the Ghetto itself and not the entire city. In the 1944 Rising, 200,000 Poles were killed, about ten times as many as in the Ghetto Uprising.

In photo above:  Wearing the traditional grey uniform of Poland’s scouting organization (Harcerze) is Scoutmaster Jadwiga Chrusciel (center). She is the daughter of Gen. Antoni Chrusciel who was the commanding officer of Poland’s Armia Krajowa in the Warsaw Uprising (The Rising) of August, 1944. Greeting her at the annual commemoration of the World War II event held at St. Stanislaus Bishop and Martyr Church in Lower Manhattan are officers of the Downstate N.Y. Division of the Polish American Congress, Treasurer Grazyna Michalski (left) and President Frank Milewski. Photo by Polish American Congress – Downstate NY Division

Both uprisings were monumental events in Poland’s World War II history.  The Ghetto revolt was primarily a Jewish action with aid given it by forces of the Polish underground resistance. When it began on April 19, 1943, both the red-and-white Polish flag and the blue-and-white banner of the Jewish Military Union were unfurled above the Ghetto.

Polish Boy Scouts and Girl Scouts (Harcerze) were active participants in Warsaw’s 1944 Rising. Jadwiga Chrusciel, the teenage daughter of Gen. Antoni Chrusciel who was Poland’s commanding officer in the event, was one of them.

The Scout Troop (Zoska) was able to liberate a concentration camp in the center city (Gesiowka) which held 350 Jewish prisoners.  The liberation set free all 350 of them from their German oppressors.

To express their gratitude to their Polish liberators, many of these Jews volunteered to fight alongside the Polish resistance forces (AK-Armia Krajowa) against the Germans.  The State of Israel also expressed its gratitude to the Polish Scouts by honoring the Zoska Troop as “Righteous Gentiles” at its Yad Vashem Holocaust Memorial.

The reality of such joint Jewish-Polish military actions has become especially significant this year in view of the inclusion of some anti-Polish material reminiscent of old WW II Nazi propaganda in a TV miniseries produced recently in Germany.

It attempts to put the Anti-Semite label on the anti-Nazi and anti-Communist wartime record of Armia Krajowa by fictionalizing and portraying the Poles as refusing to allow Jews to join them in the resistance movement.

The present Polish government has already protested the misrepresentations in the TV series titled, “Our Mothers, our Fathers” as well as German efforts to get the series aired in the United States.

Poles view this shameful effort to destroy the reputation of the largest and most effective anti-Nazi and anti-Communist underground resistance in wartime Europe extremely disturbing, according to Frank Milewski, president of the Downstate N.Y. Division of the Polish American Congress.

“It smears the historical image of Armia Krajowa members like the late Jan Karski who was awarded the Presidential Medal of Freedom by Pres. Obama last year.  Karski is recognized today as “the man who tried to stop the Holocaust” for warning the Allies that the Germans were conducting the Holocaust during their occupation of Poland,” he said.

New York’s Polish community traditionally remembers The Rising each August with a Memorial Mass at St. Stanislaus Bishop & Martyr Church on the City’s Lower East Side. It was established in 1873 and became New York’s first parish for Polish immigrants.