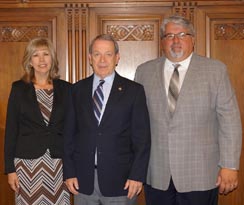 CHICAGO, IL – The Polish Roman Catholic Union of America (PRCUA), the oldest Polish fraternal organization in the USA, installed its 2014-2018 national officers and directors on Sunday, September 14, 2014. National Chaplain Rev. Canon Walter Ptak, of Orchard Lake, MI, administered the oath of office during the Installation Mass celebrated at St. Ferdinand Church in Chicago, IL, which was followed by a Banquet in Rosemont, IL. The executive officers and members of the board of directors were elected at the PRCUA’s 61st National Quadrennial Convention held in Toledo, Ohio, from August 10-13.

National President Joseph A. Drobot, Jr. was re-elected to his second 4-year term of office. He permanently resides in Bloomfield Hills, MI, with his wife, Judy, and they are currently located in Chicago, IL. Over the past four years, under President Drobot’s leadership, the fraternal has grown much stronger financially.

The newly-elected National Vice President is Micheline “Misia” Jaminski, who resides in Homer Glen, IL with her husband, Richard. She is the founder and director of the PRCUA’s Wesoly Lud Polish Folk Dance Company. Mrs. Jaminski has been choreographer for the PRCUA’s Cinderella-Prince Charming Ball for 35 years from 1976-91 and 1994-2014 and her husband has been the musical director for the Ball for 20 years. They are business owners in the Chicagoland area. Vice President Jaminski will be administrator of the PRCUA’s schools, as well as its fraternal activities and sports programs.

National Secretary-Treasurer James Robaczewski was re-elected to another 4-year term of office. He resides in Chicago with his wife, Elaine, and sons Tommy and Joey. During his first term of office, he oversaw extensive renovations to the PRCUA home office.

The PRCUA, which was founded 141 years ago in 1873, provides affordable life insurance and annuities to its members. The organization is looking forward to a bright future of continued service to its members across the nation and to the Polish American community.