Pilgrimage: Devotees of the Traditional Mass
Honor Our Lady

NEW JERSEY – The parishioners Holy Rosary Church in Passaic were happy to have the Blessed Mother for an extended visit. It was difficult to break away from dinner since we were enjoying one another’s company, but I needed to bring Our Lady to West Orange. As I arrived at Holy Rosary in Passaic about 700 people of all ages had gathered to say farewell to Our Lady. Their faith and their great devotion to Our Lady of Czestochowa were truly edifying. I almost felt guilty for taking her away from them. The people sang Czarna Madonna as a group of men carried Our Lady to the vehicle parked outside. Father Stephan Las, the pastor of Holy Rosary, expressed his gratitude on behalf of all his parishioners to me and to Human Life International for making the visit possible. 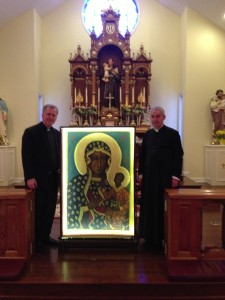 Margaret Stanco-McGrath, a Polish immigrant, helped to arrange my visit to St. Anthony of Padua Oratory in West Orange, New Jersey. Her husband John and I learned during our conversation that we may be related. Like my own family, John’s ancestors were Irish immigrants who found work in Scotland and then came to America. My mother was born in Scotland. My grandfather first came to America in 1923 to find work and then sent for the rest of the family and settled in West Orange. Margaret invited me and my father, who still lives in the area, to dinner on Friday afternoon.

I was greatly relieved to arrive just in time before Mass began at St. Anthony of Padua Oratory in West Orange. I had left dinner later than I wanted to and was driving in New Jersey traffic during rush hour.

Canon Jean Marie Morreau is the Rector and a member of the Institute of Christ the King Sovereign Priest, a Society of Apostolic Life of Pontifical Right whose goal is the honor of God and the sanctification of priests in the service of the Church and souls. The Institute celebrates the “Latin Mass” in its traditional form with the blessing of the Church. The “Latin Mass” is more properly called The Extraordinary Form of the Roman Rite. Since there is no concelebration in this rite, I heard confessions as Canon Morreau offered the Mass.The Mass for First Friday was followed by exposition of the Blessed Sacrament, the praying of the Rosary and Benediction. Prayers were offered for the defense of human life and natural marriage. Afterwards, I spoke to those assembled about the icon and the purpose of the From Ocean to Ocean Pilgrimage in Defense of Life. 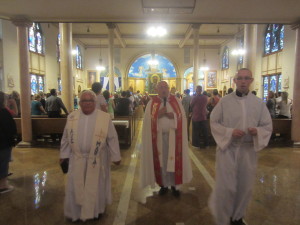 Denise Galloway was present at the Mass with her mother. Originally from New Jersey, Denise now lives in Orlando, Florida. She has been planning to bring the icon to Orlando in late January and was more excited than ever to have Our Lady visit Florida after seeing the icon and hearing the purpose of her historic pilgrimage!

In photo on right: Procession at Holy Rosary Church in Passaic, NJ.

In the morning I attended the 9 a.m. Mass and afterwards again shared the story of the icon and pilgrimage to those who had missed my presentation the night before. Canon Morreau was a gracious host, including inviting me to dinner not far from where my grandparents once lived. He expressed his desire to work with Human Life International in the future in the defense of life, faith and family. I hope to be able to accept his offer to teach me how to offer the Traditional Mass when my travels subside.

Find more information about the Ocean to Ocean campaign and view the North America pilgrimage schedule at www.hli.org/oceantoocean.

– Father Peter West is the Vice President for Missions at Human Life International. In 2011, Father West not only joined HLI, but he also celebrated both his 20th anniversary as a priest, and 25 years of defending the right to life of the most vulnerable members of society. He came to HLI after 13 years with Priests for Life, where he served as Associate Director.