The New Jersey Devils go into 2018 and the second half of the NHL season with a sixth seed and a Playoff spot secured at this point. The Devils have not been to the Playoffs since their 2012 Stanley Cup Finals loss to the LA Kings.

A number one pick in the NHL Draft in Chicago set in motion the beginning of a new feeling in June. The arrival of Nico Hischier, their number one pick to play alongside Taylor Hall, who after an injury last season never truly regained his All Star form, has resulted in the Devils improving in every category. Hall and Hischier have also elevated the play of all their teammates making the Devils formidable contenders. Veterans Andy Greene, Kyle Palmieri, and Travis Zajac are playing better; turning around a 16-17-8 record to 22-12-8. 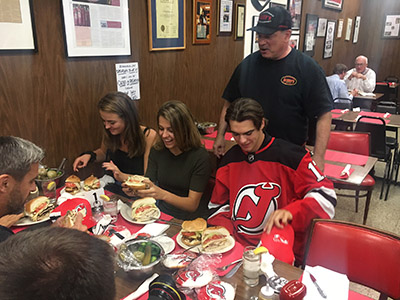 I covered the NHL Draft in Chicago as NJ had the first overall pick for the first time in franchise history and securing Nico who got a sandwich named after him has breathed new life into the Devils.

Attendance at The Rock is up as the Devils are selling out home games and delivering exciting play to their dedicated fans. The second half will decide if the Devils can bring postseason Play back to Newark.

Coach John Hynes had carefully placed rookies with veterans and mixed the lines and playing time to use team speed to make the Devils a tough team to play. 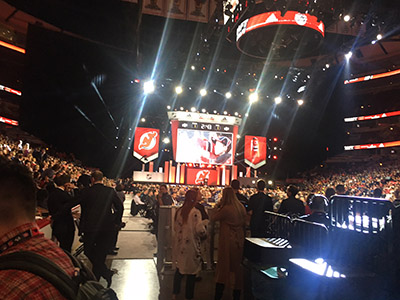