In the aftermath of the German and Soviet invasions and division of Poland, more than 1.5 million people were deported from their homes in Eastern Poland to remote parts of Russia. Those who made it out of Russia alive were lucky—and nine-year-old Krystyna (Krysia) was among them. In Krysia: A Polish Girl’s Stolen Childhood During World War II, A Memoir (Chicago Review Press; January 1, 2017; ages 10 & up), Mihulka (now in her 80s) shares, from a child’s perspective, the story of her family’s deportation by the Soviets and their subsequent two years as prisoners on a Soviet communal farm in Kazakhstan.

Mihulka’s family lived in deplorable conditions along with many others deportees, endured starvation and illness and witnessed death. Amazingly, there were also moments of tenderness and hope, and even small celebrations while in captivity—Krysia’s ever-resourceful mother manages to provide chocolates for Christmas. Despite the horrors, Mihulka focuses on how her mother’s strength, courage and kindness saw her and her younger brother through until they finally found freedom. 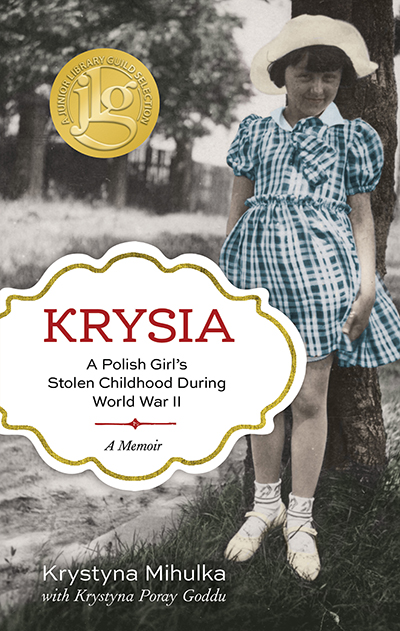 Tracing her family’s across-the-world journey from Lwow, Poland to Kazakhstan and their eventual escape to freedom via Turkmenistan, Persia, Rhodesia, South Africa and ultimately the United States, Mihulka presents her true story in a tone appropriate for younger readers. Including photographs and a Polish vocabulary pronunciation guide, Krysia is a moving, illuminating addition to general history and World War II bookshelves.

“This memoir has power and does the necessary work of prompting readers to try to imagine what it’s like to be among the millions of children undergoing similar upheavals in the war zones of today.” —Booklist

Born in 1930, Krystyna Mihulka was deported from Poland to Kazakhstan in 1940, where she lived as a political prisoner under Communist rule for nearly two years. After several years in refugee camps in Iran and Africa, she settled in Zambia, where she married and had three children. In 1969 she and her family migrated to the United States. She lives in Pleasant Hill, California, under her married name, Christine Tomerson. Krystyna Poray Goddu is the author of A Girl Called Vincent and Dollmakers and Their Stories. She has contributed to American Girl magazine, the New York Times Book Review, Publishers Weekly, and other publications. She lives in New York City.