In 1974, reptile researcher Robert Zappalorti captured a female bog turtle in a Sussex County swamp. In keeping with protocols, he marked the turtle by cutting tiny identifying notches on the edge of her shell. After snapping her photo – which became the cover of his guidebook – Zappalorti released the turtle back into the swamp.

More than 40 years later, in 2017, the same turtle was found by another researcher, Colin Osborn of the U.S. Fish and Wildlife Service.  Amazingly, she was still in the same Sussex County swamp!

“It just goes to show you that if the habitat is there for them, they will survive,” said Zappalorti, noting that the turtle’s boggy home was permanently preserved during the period between her first and second captures.

Unfortunately, good habitat doesn’t exist for all bog turtles. Due to habitat loss and fragmentation, bog turtles are endangered in New Jersey. The state’s Endangered and Nongame Species Program estimates that there are fewer than 2,000 in the entire state.

But there’s hope for these small, beautiful turtles, which grow to about four inches long and have bright yellow or orange markings on their necks.

Thanks to an effort launched by Princeton schoolchildren and embraced by local legislators, in June the bog turtle became New Jersey’s official state reptile. The official designation helps raise public awareness of threats to bog turtles – and support for measures to increase their population. 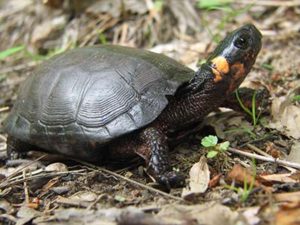 The bog turtle originally found by Zappalorti is now estimated to be between 65-70 years old, which makes her the oldest known living bog turtle in the state.

However, he added, many bog turtles are limited in their ability to move around and breed with bog turtles from other populations. “Close to half of the known bog turtle populations are probably isolated,” said Zarate. “That’s saddening.”

Roadways are one major barrier, and so are patches of development and non-traversable agricultural fields.

Bog turtles are also jeopardized when their swampy habitat becomes contaminated by pollutants, such as motor oil, road salt, fertilizer and other chemicals carried by stormwater runoff.

Not surprisingly, most of New Jersey’s bog turtles are found in rural areas with less roads and development. Sussex and Warren counties are the strongholds, with populations also found in parts of Morris and Hunterdon counties. In southern New Jersey, bog turtles are mainly found in Salem, Gloucester and Burlington counties.

According to Zarate, the first step toward restoring bog turtle populations in New Jersey is protecting their habitats.  “If we can do a good job at protecting wetlands and protecting the uplands surrounding the wetlands, that’s a primary approach to restoring them,” he said. Removing invasive plants will also improve the habitats.

Improving connectivity between swampy habitats will also help. The Endangered and Nongame Species Program is creating safe passage for a population of bog turtles in Monmouth County by building two “turtle tunnels” beneath roads, along with fencing to guide turtles toward the tunnels.

Bog turtles lay only one clutch of two to four eggs per year, so another important way to increase their numbers is to protect eggs and hatchlings from predators by placing wire cages around known nests.

Thanks to the schoolchildren who helped bog turtles become New Jersey’s official state reptile – and to the scientists and researchers working to ensure their long-term survival!

Bog turtles are just one of many rare species that benefit from permanent land preservation. Thanks to New Jersey’s dedicated open space preservation fund, we can continue to preserve habitat for our state’s unique and beautiful threatened and endangered species.

For more information on bog turtles, go to www.state.nj.us/dep/fgw/ensp/pdf/end-thrtened/bogtrtl.pdf and www.conservewildlifenj.org/species/fieldguide/view/Glyptemys%20muhlenbergii/.

To find out about other official New Jersey plants and animals, go to www.state.nj.us/nj/about/symbols/. 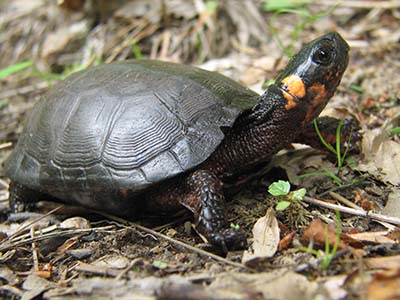