Bergen County, NJ –Join the New Jersey Choral Society as they present their stunning 2013-14 season finale “An Austrian Affair,” featuring the works of 18th and 19th composers who worked in Vienna, on Saturday, May 31 at 8:00 pm at the Westside Presbyterian Church, 6 South Monroe St., Ridgewood. 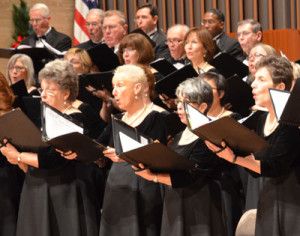 Established in 1980, the New Jersey Choral Society is one of the state’s most prestigious choral groups well-known for presenting outstanding and unique programs. Under the direction of Eric Dale Knapp, NJCS performs three major concerts annually in Bergen and Essex counties. They have performed in Austria, the Czech Republic, Germany, China, Australia and England. In July 2014, they will perform in France as part of the Normandy Festival commemorating the 70th Anniversary of the Normandy invasion. The chorus will be accompanied by pianist/organist Linda Sweetman-Waters.

Come one hour prior to concert time for The Inside Line, a complimentary lecture that provides an insightful and intimate discussion of the music for all ticket holders.

In support of the Center for Food Action, the New Jersey Choral Society will be collecting nonperishable food items at this concert. Westside Presbyterian Church is wheelchair accessible. Funding has been made possible in part by funds from the New Jersey State Council on the Arts/Department of State, a Partner Agency of the National Endowment for the Arts.