NEW ORLEANS (September 27, 2016)  To commemorate the 75th anniversary of the surprise Japanese attack on Pearl Harbor, PBS member station WYES-TV/New Orleans and The National WWII Museum will webcast a national, interactive Electronic Field Trip (EFT) focusing on the events of that momentous day. Debuting live on December 7 (9:00 am and 1:00 pm CST), Remember Pearl Harbor  How Students Like YOU Experienced the Day of Infamy will give students from across the country an opportunity to join student reporters as they deliver updates from the Museum in New Orleans and historic sites on Oahu, including Pearl Harbor.

In addition to on-the-scene reporting by Julia Bresnan and Eliana de Las Casas, the EFT will feature eyewitnesses to the attack, who in 1941 were the same age as Remember Pearl Harbors intended audience today. Students in grades 5 through 8 will watch as witnesses recall the raid they experienced as children and discuss the effect it had on their lives in the aftermath. Jimmy Lee, who is also participating in the Museums 75th anniversary of Pearl Harbor tour, will bring Bresnan to the exact spot where he saw the events unfold before his eyes less than a mile away from the harbor, when he was only 11 years old.

Guided by staff members from the Museums education department, students will also see Museum exhibits and artifacts related to the attack, then visit historic sites in Hawaii linked to that day. 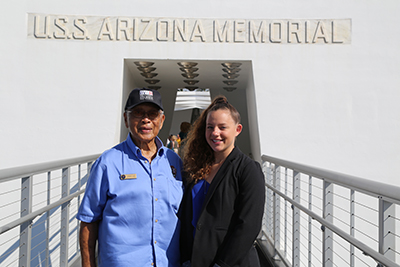 Students who tune in for the field trip will get an up-close look at the National Memorial Cemetery of the Pacific, the USS Arizona Memorial, Wheeler Army Airfield and the Pacific Aviation Museum on Ford Island, said Chrissy Gregg, the Museums virtual classroom coordinator. They will also visit Roosevelt High School on Oahu to learn how the lives of students dramatically changed after December 7. As we commemorate this critical moment in our nations history, the field trip will truly allow todays young people to connect with the events of that day.

Designed for national web streaming, Remember Pearl Harbor is expected to reach more than 100,000 students across the nation. In addition to eyewitness accounts from those who were children in 1941, the field trip will feature compelling testimony from veteran survivors. Participating students will also have the opportunity to ask questions in real time and participate in live polls.

WYES producers Tom Gregory and Marcia Kavanaugh, along with Museum educators Chrissy Gregg and Kenneth Hoffman, coordinated production for the EFT. Gregory will host the program live from the Museums US Freedom Pavilion: The Boeing Center. Kavanaugh notes, WYES is pleased to collaborate with the Museum to offer this well-researched, credible and interactive lesson about the significance of the attack on Pearl Harbor to students nationwide. Following the live webcast on December 7, the EFT will be archived online and available on demand to teachers and students.

The National WWII Museum and WYES partnered to produce their first Electronic Field Trip in 2015. Were All in This Together! reached students in 48 states and was recently honored by the National Educational Telecommunications Association with the 2016 Instructional Media Award, Discrete Learning Object. This award is national recognition.

Learn more about how your classroom can participate in Remember Pearl Harbor by visiting pearl75.org/electronic-field-trip. Send questions in advance to fieldtrips@wyes.org.

For nearly 60 years, WYES has worked to inform, teach, illuminate, entertain and inspire our entire community. It is the oldest public television station serving southeast Louisiana and the Mississippi Gulf Coast, the 12th oldest in the nation, and the most utilized non-profit organization in our two states with as many as a half-million people using our broadcasts, outreach activities and website each week. We are proud to be part of the nations largest classroom, the largest stage for the arts and a trusted window to the world. For more information, call 504-486-5511 or visit wyes.org. Like us on Facebook (wyes.neworleans). Follow us on Twitter (@WYESTV) & Instagram (wyestv).

The National WWII Museum tells the story of the American experience in the war that changed the world  why it was fought, how it was won, and what it means today  so that future generations will know the price of freedom and be inspired by what they learn. Dedicated in 2000 as The National D-Day Museum and now designated by Congress as Americas National WWII Museum, it celebrates the American Spirit, the teamwork, optimism, courage and sacrifices of the men and women who fought on the battlefront and served on the Home Front. For more information, call 877-813-3329 or 504-528-1944 or visit nationalww2museum.org.
###