But the National Guard Soldiers of the 42nd Division knew they were coming.

Captured prisoners from raids across no-man’s land had revealed the enemy plan to strike near Reims in the early hours of July 15. The attack would threaten Paris and separate French and British forces.

It was Germany’s last-ditch effort to end the war before American forces, some 10,000 troops arriving in France each day, tipped the scale. Many of those American forces, including the 42nd “Rainbow” Division, were already in the line. 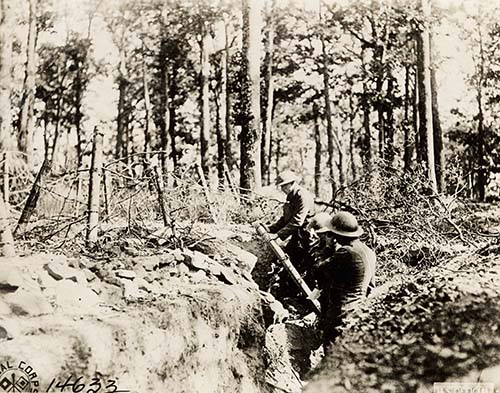 “The second battle of the Marne was the turning point of the war,” said former Rainbow artillery commander and later Army Chief of Staff, Maj. Gen. Charles Summerall, in the 1928 Henry J. Reilly book “America’s Part.”

As part of the French Fourth Army, the 42nd Division held a portion of the allied line and prepared to meet the German attack.

The Rainbow Division, nicknamed for its National Guard Soldiers coming from 26 states and the District of Columbia, stretching across the U.S. like a rainbow, had just left the Baccarat sector on June 21 and was placed in the line with the French July 1.

By mid-July there were sixteen American divisions on the Western Front and six were now prepared to defend Paris along the front at Chateau-Thierry with some 85,000 Doughboys.

On July 7, a week before the battle, French Fourth Army Commander General Henri Gouraud encouraged his force to be ready:

“We may be attacked at any moment,” Gouraud wrote. “You all know that a defensive battle was never fought under more favorable conditions. You will fight on terrain that you have transformed into a redoubtable fortress. . . . The bombardment will be terrible. You will stand it without weakening. The assault will be fierce. . . . In your hearts beat the brave and strong hearts of free men. None shall look to the rear; none shall yield a step. . . . Each shall have but one thought, to kill, to kill plenty. . . . Your General says to you, ‘You will break this assault and it will be a glorious day.'”

Gouraud believed the enemy would try to force his way down the road to Châlons-sur-Marne and placed the Rainbow Division on this key terrain.

The Americans implemented Gouraud’s elastic plan of defense, offering up an initial trench line as a sacrifice to the German attackers.

“Gouraud had abandoned his first-line system and turned it into a mass of death traps,” wrote Raymond Thompkins in his 1919 “Story of the Rainbow Division.”

“No Soldiers were there, except the handful of French men in sacrifice companies prepared to face certain death for the sake of keeping the Germans fooled into believing that the signal flares and rockets they sent up by night and their own visible movements by day meant that the first line was full of troops,” Thompkins wrote.

U.S. Army Soldiers rest between action in an old trench in the Marne salient in mid-July, 1918. Historians refer to the Second Battle of the Marne, fought July 14-17, 1918, as turning the tide of WWI and saw the shift of initiative from the Central Powers to the Allies. Stereoscopic image 19299 courtesy of the Keystone View Company, Meadville, Pennsylvania.

PICTURE: Soldiers rest between action in an old trench in the Marne salient in mid-July, 1918. Historians refer to the Second Battle of the Marne, fought July 14-17, 1918, as turning the tide of WWI:

Ten minutes before the planned German artillery bombardment, the allies struck with their own fire. Allied artillery fired on likely German troop concentrations at 11:50 p.m. on July 14.

Rudolf Binding, a German officer, wrote in his diary that, the French “put up no resistance in front…they had neither infantry nor artillery in this forward battle-zone…Our guns bombarded empty trenches; our gas-shells gassed empty artillery positions….The barrage, which was to have preceded and protected [the attacking German troops] went right on somewhere over the enemy’s rear positions.”

When the Germans arrived at the 42nd Division main line of defense, they faced machine gun and rifle fire from Rainbow Soldiers determined to hold their ground.

The defensive line included National Guardsmen from New York’s 165th Infantry on the extreme left, then the Ohio 166th Regiment, followed by the Alabamians of the 167th Infantry and Iowans of the 168th Regiment northeast of Souain.

“Between the Alabamians and the New Yorkers ran the ancient Roman road to Chalons-sur-Marne. They were the guardians of the pass,” Thompkins wrote.

German tanks attacked the right side of the 42nd line, threatening the entire defensive position.

“German tanks had been able to get up here and the allied artillery was not having the destructive effect that it had in the center and on the left,” Thompkins wrote in his history of the division.

“The Maryland Trench-Mortar Battery, manning their little guns out there on ground the Boche (German force) was now crossing, had fired 750 bombs during the morning, scoring direct hits on four tanks and putting them out of action. Seven more tanks had crawled through and were lumbering down the valley between the two slopes. The 37 millimeter guns of the 167th put them all out of action,” Thompkins wrote.

The battle lasted well into the afternoon. 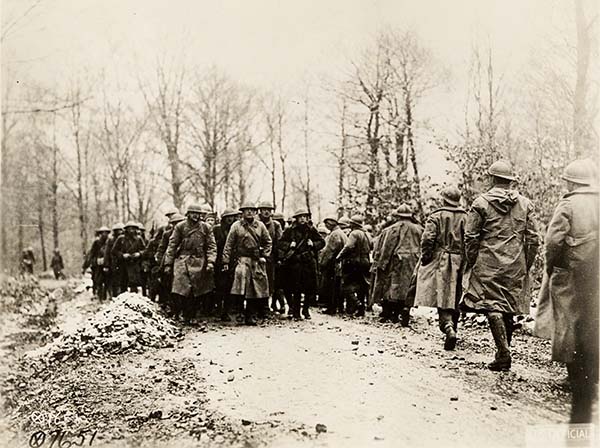 PHOTO: Soldiers from Co. D, 165th Infantry, formerly the 69th Infantry of the New York National Guard, pass French Soldiers on the road from duty on the Western Front near Benemenil, France, March 1, 2018

“By noon they (the enemy) had gained a foothold seven times in the New Yorkers’ trenches and seven times had been hurled out,” Thompkins wrote. “That evening at six o’clock they tried it again and were beaten off.”

“The assault broke at the edge of the trench where it was met by cold steel,” wrote 165th Infantry Regimental chaplain Francis Duffy in his 1919 memoir, “Father Duffy’s Story.”

“It was man to man then and the German found who was the better man. The assaulting mass wavered, broke and fled,” Duffy wrote.

The 69th [New York] and the Alabama Regiment had refused to fall back to safety during the fighting, newspaperman Floyd Gibbons recalled after the war.

“When the 69th and the Alabama continued to hold,” Gibbon said during a 1919 talk , “the French General [Gouraud] said, “Well, I guess there is nothing for me to do but fight the war out where the New York Irish want to fight it.”

Later in the day, German Marshal Paul Hindenburg ordered the German Crown Prince “to stop the German troops’ bleeding to death against the Fourth French Army.”

There would be much hard fighting ahead for the Doughboys of the Rainbow Division and the AEF. But the German defeat at the Marne marked the beginning of the allied Hundred Days Offensive leading right to the Armistice of November.

“The combats of July 15 and 16, much to the surprise of the Germans, stopped their attacks. From then on, the Allies could do what the Germans had been doing: attack when and where they pleased,” Summerall said.

For the Rainbow Division, it would begin with the division’s first offensive operation of the war, coming just two weeks after Chateau-Thierry.

During the World War I centennial observance, the New York National Guard and New York State Division of Military and Naval Affairs will issue press releases noting key dates which impacted New Yorkers, based on information and artifacts provided by the New York State Military Museum in Saratoga Springs, N.Y.