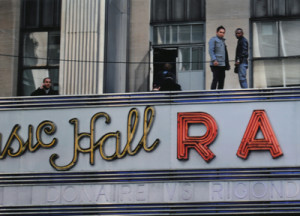 NEW YORK – Madison Square Garden and its premiere second location, Radio City Music Hall,  will be the venue for two up-coming boxing shows on April 13th at Radio City and April 20th at “The Theater at MSG.” The world’s most famous arena, MSG, may not have the most championships in basketball or hockey, but there’s no denying that in the world of boxing, MSG since the 1800’s has hosted many of the greatest and most memorable boxing events in America.

In photo on right: Radio City Music Hall is an iconic venue known for its spectacular Christmas Show and the world renown “Rockettes.”  Standing above the marquee and getting ready to rumble in the Hall’s second boxing show on April 13 are Nonito Donaire and Guillermo Rigondeaux.  Also on the roof and to the left of the fighters is Larry Torres of MSG helping to choreograph the fighters.

Radio City Music Hall, the home of the “Rockettes” and the ever famous air plane hangar stage, will once again open its doors to boxing.  As this is only the second time in 82 years that boxers will appear on the stage. This evening promises to be a night of excitement in midtown Manhattan. The 2000 sellout of Roy Jones defeating David Telesco for the Light Heavyweight Championship was covered by myself and I can truthfully say, “what took so long to bring boxing back to the home of the “Rockettes”?  A sell out crowd watched that evening’s show as will another sell out crowd which is expected when Nonito Donaire from the Phillipines battles Guillermo  Rigondeaux from Cuba.

Televised live on HBO on April 13th at 11 pm, WBO Junior Featherweight Champion Donaire (31-1) will take on WBA Super Bantamweight Champion, Rigondeaux (11-0) in what promises to be a match up not often seen because of today’s constant avoidance of two fighters of terrific caliber looking to fight someone else. Donaire is the 2012 BWAA Fighter of the Year. I did vote for him against two time Gold Medalist Guillermo Rigondeaux.

Top Rank founder Bob Arum is proud to bring such a fantastic fight to Radio City Music Hall. And don’t think it was easy, with negotiations over blood testing almost curtailing the fight at the last minute. The Cuban fighter noted that he defected to America so he could have the freedom to fight great opponents.  Arum boasted about the caliber of the two fighters noting that the 11-0 record of Donaire is misleading as he was stuck in Cuba.  Bob also noted how difficult it is to win two Gold Medals. 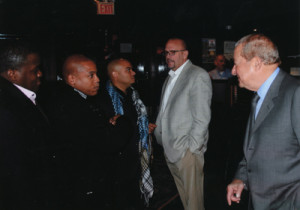 It’s important to remember that in Cuba the fighters are amateurs with no recourse to the professional ranks because of communism.  A fighter must leave Cuba which can be difficult if not impossible or defect.

Donaire has accomplished much since debuting in 2001 with four wins in 2012.  His only blemish was his second fight in ’01 to Rosendo Sanchez in a 5 round decision.

In photo on right: Bob Arum, founder of Top Rank Boxing, and his vice-president, Carl Moretti of North Arlington, NJ are seen negotiating a last minute deal with the handlers of Cuban fighter Rigondeaux as they discuss the finer details of drug testing between the two fighters. Testing has become a big issue recently.  The deal became complete and the contracts were signed minutes before the press conference.  A sell out is expected in the  HBO televised show.

Guillermo is undefeated with only 11 professional fights having debuted in 2009.  The Cuban fighter is 2 years older with less professional experience but his Olympic background and Cuban training should not be underscored.

HBO has a terrific bout for this night and the festive location at Radio City should make for a great evening of boxing.

On April 20th another good show will be produced at MSG but this time NBC will air the fight live on Network television starting at 4 pm, thanks to the deal brokered by Kathy Duva of Main Events over a year ago.  The venue is “The Theater at MSG” and the opponents are Tyson Fury (20-0) vs. Steve Cunningham (25-5) in a battle of two Heavyweights fighting a 12 Round IBF Eliminator with the winner establishing the right to meet Champion Wladimir Klitschko.

Tickets are reasonably priced for this rare day time show starting at $25.  The live telecast on Channel 4 will be the network’s second fight having aired  Tomasz Adamek’s win over Cunningham in December.  The ratings were sensational for the network’s return to boxing spun upon by the creation of the NBC Sports Network which has revived hockey on national telecasts and lent itself to another channel to watch boxing other than HBO or ESP.

The low key Kathy Duva, President of Main Events, has brokered a solid deal with NBC which has allowed her company to telecast boxing on both cable and the Network. Duva has used the  Prudential Center in Newark to  stage many fights and going to MSG is only fitting. The Irish Heavyweight  champion, Fury, should be a great draw in New York City and a daytime event in the spring should bring a sell out.