(Miami-Dade County, FL) —  Miami-Dade County Mayor Carlos A. Gimenez, Board of County Commissioners Chairwoman Rebeca Sosa, and officials from Miami International Airport and Poland’s Rzeszów-Jasionka International Airport (RZE) signed a marketing agreement this week designed to expand passenger and cargo connections between the two hub airports that serve the U.S., Latin America and the Caribbean, and East-Central Europe, respectively. Rzeszów-Jasionka International Airport is located in southeastern Poland, a region that is home to several major global corporations and their subsidiaries, institutes of higher education, and foreign consulates.

In photo: at left, officials from MIA and Rzeszów, Poland sign the marketing agreement during the Air Cargo Americas Conference.

“MIA is the number one economic engine in Miami-Dade County, and this agreement represents a great opportunity to establish trade ties with the growing economies of East-Central Europe while also stimulating local job growth,” said Mayor Gimenez.

The new agreement was brokered by the Polish-American Chamber of Commerce of Florida and the Americas with two specific objectives: to stimulate new business with companies from Poland and the surrounding region by capitalizing on MIA’s strategic location as a hemispheric gateway; and to directly engage with key business associations in East-Central Europe to promote new business opportunities. The area around Rzeszów-Jasionka International Airport is home to major corporations including:

•            The Eastern IT Cluster, a group of IT companies headquartered in Rzeszów

“This landmark agreement is the latest example of how Miami-Dade County is solidifying its position as not only the Gateway of the Americas, but as one of the world’s preeminent hubs for international commerce,” said Chairwoman Sosa. 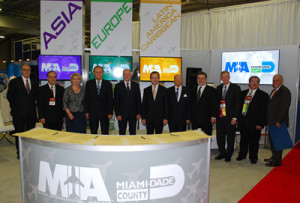 The official signing of the agreement took place at the Air Cargo Americas Conference, which brings together aviation executives to exchange views and develop strategies to enhance the growth of the air cargo industry. In addition to MIA and RZE officials, Poland’s Podkarpackie Region Governor Wladyslaw Ortyl and Polish government and business delegates were on hand to see the agreement finalized.

“MIA is the ideal transit hub for our Polish trade partners to have direct access to vast markets in the U.S., Latin America and the Caribbean,” said Miami-Dade Deputy Aviation Director Ken Pyatt. “This agreement presents an exciting opportunity for us to strengthen ties to the East-Central Europe region and promote mutually beneficial trade.”