Only New Jersey Engagement For Slask! 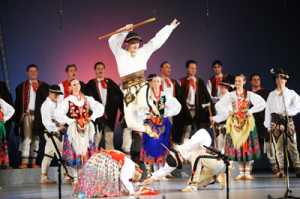 NEW JERSEY – McCarter Theatre Center in Princeton, NJ, will present Śląsk Polish Song and Dance Ensemble of Poland on Thursday, March 21 at 7:30 p.m. As one of the largest Polish folk ensembles, they have performed over 6,000 shows all over the world. Their 60th Anniversary Tour will celebrate the vivid and dynamic folk music and dance of Poland with an 80-member ensemble and stunning, traditional costumes.

Śląsk Polish Song and Dance Ensemble of Poland was formed in 1953 by renowned composer, educator and writer Stanisław Hadyna. Śląsk’s debut performance in Warsaw in 1954 profoundly impacted the country, and as a touring show the ensemble still delights and amazes audiences all over the world. The group is currently based in Koszęcin, a village located in southern Poland, and tours worldwide.

The ensemble’s founder Stanisław Hadyna was born in 1919 and studied music and psychology growing up. He served in the Department of Culture, as Director of the District Offices of the Trade Union, and as director of the People’s Republic of Musicians Concert Office and the Provincial Delegation. In 1952, Hadyna organized a team of the People’s National Song and Dance (Śląsk), and became the artistic director, conductor and director. Hadyna left the ensemble in 1968 but returned in 1990 to remain artistic director until his death.

Śląsk originally focused on the folk traditions of Upper Silesia, Cieszyn Silesia, and the Beskids, but it was later expanded to include all Polish regions. The ensemble specializes in presenting Polish, secular folklore, whose characteristic rhythms, expressions, melodic phrases and texts culminate in a unique spectacular performance. There are over 100 performers in Śląsk, and the troupe consists of a choir, ballet and orchestra. One of the highlights of the show is the spectacular traditional costumes; there are over 1,000 in the performance, making it a one-of-kind-show. There is no other group which equals Śląsk in its ability to present the folklore of Polish highlanders. The traditional tunes convey a sense of the customs from the green pastures of the Beskids Mountains to the steep peaks of Tatras Mountains.

The troupe has produced 12 albums, four of which went gold and one platinum. They have also won several awards including the Music and Art Award of Silesia, an Honorary award from the President of the United States, an Honorary award from the ministry of culture of the Soviet Union, and an award from the Silesian Voivodeship. The Śląsk Ensemble has worked with such distinguished Polish composers as Wojciech Kilar, and performed for Pope John Paul II in 2000 who was a patron of the troupe on numerous occasions. Some of their most notable songs to look forward to are Szła dzieweczka (She Followed the Maid), Helokanie, Ondraszek, Głęboka studzienka (The Deep Pit), and Karolinka (Free Man).