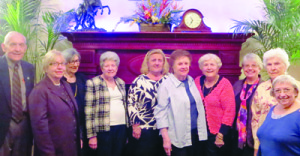 Brooklyn, N.Y. ..The name of the Marie Sklodowska-Curie Professional Women’s Association has been added to the list of individuals and organizations the Downstate New York Division of the Polish American Congress will honor when it holds its October 26th Annual Awards Banquet at Greenpoint’s Polish & Slavic Center.

“To recognize the achievements of Polish American professional and business women and to encourage young women to complete college and become professionals themselves,” is what founder Irene Krulewski and six of her compatriots set as the goal of the organization they were forming in 1996.

When it came to finding an appropriate name for the new professional achievement group they were launching, it seemed only fitting to name it after a super-achieving Polish physicist and chemist like Marie Sklodowska-Curie.

And what a role model she was.  The discoverer of the elements radium and polonium, Madame Curie was the first woman in history to win a Nobel Prize in 1903 for physics.  Then she went on to win the Nobel Prize for chemistry in 1911 – making her the only woman to win the prize in two different scientific fields.

“The Downstate N.Y. Division of the Polish American Congress is proud to have an outstanding organization like the Marie Sklodowska-Curie Professional Women’s Association as our member,” said Frank Milewski, president of the Downstate Polish American Congress.  The Congress is the umbrella organization of America’s Polish community and acts as its political spokesman.

The current president of the Sklodowska-Curie Women’s Association is Barbara Blyskal who continues to contribute much of her personal time to the community and to the organizations which are part of it.

The Association maintains a scholarship fund with annual grants to help young women finance their pursuit of a college degree.  It is actively seeking new members wishing to participate in such a program.  They may contact Irene Krulewski at (609) 619-3947.

Also on the honorees list is Congressman Peter King (R-NY).  “We’ll use the occasion to tell Congressman King how much the Polish American community appreciates that he just signed on as a co-sponsor of the Congressional Bill H.R. 1354 which – when approved by the U.S. House of Representatives – would include Poland in America’s Visa Waiver Program,” said Milewski.

This legislation is part of the recently-passed Senate Immigration Bill.  Even if the House rejects the Senate Bill, it could still pick out the Visa Waiver section and approve that (H.R. 1354) as a separate item.  After that, all it needs is President Obama’s signature to make it law.

“The Polish American Congress has divisions and chapters throughout the United States working with their local congressmen the way Mr. King agreed to work with us,” said Milewski.  “There are 37 countries already in the Visa Waiver Program whose citizens can travel to America without the need of a U.S. visa.  We want Poland to have that same privilege.  Poland deserves it and should have had it a long time ago.”