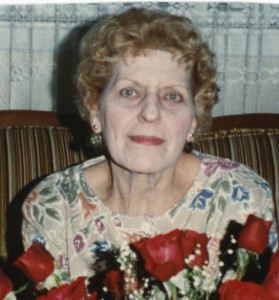 A retired Billing Department Manager, born in Swedesburg, Pa. on December 27, 1924, she was the daughter of the late Joseph A. and Helena B. (Sojkowski) Dybicz.

She is survived by her brother, Edward J. Dybicz and was preceded in death by her husband, Edward A. Lewandowski, who died July 4, 1981. She is also survived by her Godchildren, whom she loved with her whole heart and soul, Elaine Parciak of Southington, Connecticut, Anthony Hines of Harrisburg, Pa., Maria Hughes of Arlington, Virginia, Alma Jakielaszek of Spring City, Pa., and Roberta Nelson of Swedesburg, Pa.

A graduate of the Sacred Heart of Jesus Parochial School, Class of 1939, Swedesburg and Upper Merion High School, Class of 1943, she also attended the former Norristown Business College. She was a life member of the Sacred Heart of Jesus Roman Catholic Church, Swedesburg, and a member of the Children’s Choir from 1931 to 1939 and the adult St. Cecelia’s Choir since 1939. She was active with church organizations including the Polish Festival and the Christmas Bazaar. She was known as an accomplished pianist, organist and vocalist, performing at many local, Philadelphia and New Jersey churches, and was a member of the former Polish Eucharistic Choir, Philadelphia Archdiocese. She also served as co-coordinator for the Channel 6 Television Sunday Mass, Communications Division of the Archdiocese of Philadelphia.

During World War II, Marie volunteered as a nurses aid with the Civilian Defense. She was an avid seamstress and embroiderer, designing many originals. Her favorite hobby was in culinary arts, she loved to prepare gourmet foods and exquisite desserts. Her original, novel recipes were published over the years in many national magazines and newspapers, including The Post Eagle. She enjoyed life to the fullest and touched many people, both young and old, with her love and caring. “Manya” truly enjoyed making others happy with her bright smile, thoughtful ways and unending displays of affection that she had for everyone who came into her life. She will forever be remembered for her unique personality and touch of laughter that she shared daily with those around her.

Mrs. Lewandowski was an office staff member of the former American Screw Company of Norristown, Lee Rubber and Tire Corp., Conshohocken, and Golden Clothes, Inc., Conshohocken. She was a promotor of The Apostolate of Divine Infant Association; The Marians of The Immaculate Conception; The Central Association of The Miraculous Medal, Germantown; The Spiritual Society of the Sacred Heart and The Miraculous Medal Society of St. Mary Seminary, Perryville, Missouri, a St. Jude League Member of the Claretian Mission; a Lourdes Prayer League Missionary Oblates of Mary Immaculate, The Josephites Society of The Sacred Heart, Baltimore, Md., and Honorary Citizen of Boys Town, Nebraska.