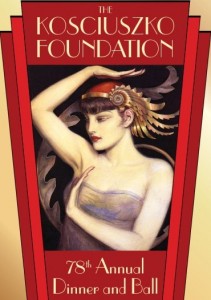 The Kosciuszko Foundation Annual Dinner and Ball is a dazzling evening of dining, dancing, debutantes and dignitaries filling the Grand Ballroom of New York’s Waldorf Astoria.

For 77 years, the Kosciuszko Foundation Annual Dinner and Ball has been the premier social event in the Polish American community and the principal fund raising activity in support of the Foundation’s educational and cultural programs.

The first ball was held at the Hotel Pennsylvania in New York, and moved to the luxurious Waldorf Astoria in 1936. As of 1941, young women aged 16 to 25, with a background of scholastic achievement have been invited to participate in the ball as debutantes. Young ladies are accompanied by their fathers and presented to the society before an audience of diplomats, community leaders and other notables.

Following the presentation of the debutantes, honored guests and dignitaries the entire assemblage is lead in the historic and stately Polonaise.

The Kosciuszko Foundation invites all young ladies between 16-25 years of age to submit an application and participate in their 78th Annual Dinner and Ball that will take place on Saturday, April 27 in the Grand Ballroom of New York’s Waldorf=Astoria Hotel. The Black Tie event will feature the Annual Debutante presentation and dancing to the Gerard Carelli Orchestra.  Wojciech Inglot, President and Founder of INGLOT Cosmetics, which has opened more than 330 boutiques around the world, will be awarded the Medal of Recognition. For more information: www.the kf.org.