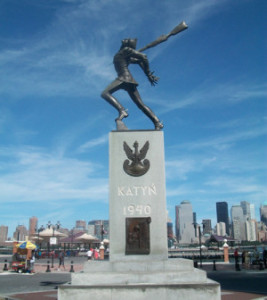 NEW JERSEY – On April 6th, at 2:00 p.m., the Polish American Congress and representatives of Polish veteran groups will hold memorial services in front of the KATYN monument at Exchange Place in Jersey City, N.J. commemorating the 74th Anniversary of The Katyn Forest Massacre and 4th Anniversary of the Smolensk Tragedy. Hon. Steven M. Fulop, Mayor of Jersey City, accompanied by other officials from the U.S. Senate and Congress, from the State of New Jersey, and representatives from the Polish Government are invited and will participate in the event. We invite all of Polonia and all members of the American community to attend and participate in the services.

On September 1, 1939, Nazi-Germany invaded Poland.  September 17, 1939, in accordance with the German-Soviet agreement of August 1939, troops of Soviet Union invaded Poland from the eastern border and partitioned the Polish nation. Poland was the first nation in World War II that was forced  to fight a war on two fronts, with two enemies at the same time. War was officially declared by Great Britain and France only against Nazi-Germany. For a period of almost six years Poland and  the underground army, known as the Polish Home Army (AK) fought two enemies without assistance from their allies in the west. Polish armed forces also fought along the side of the Western Alliance in the Near East, Italy, France, Battle of England and numerous other locations.

In April and May, 1940, on orders from Joseph Stalin, Commissar Beria, Secretary Molotov, the Soviet Secret Police, NKVD-KGB, brutally executed over twenty-two thousand Polish soldiers, officers, intellectual leaders, prisoners of war, members of the intelligentsia, professors, priests, rabbis and many leaders by a single shot in the back of the head, while being gagged and their hands tied in the back. Over 4,500 bodies were found at the KATYN forest, near Smolensk, Soviet Union, in a mass grave. Thousands more bodies were later found at execution sites at Miednoje, Charkow, and other places, some of them unknown to this day. More than two million Poles were forcibly exiled into labor camps in Siberia during 1939 to 1941. Thousands more were killed during the war period and were also persecuted and tortured during the communist era by the Soviet NKVD-KGB and by their puppet-regime and Interior Police (UB). Poland suffered over 6 million killed as a result of World War II.

In 1990, the government of then still Soviet Union, officially admitted responsibility for the act of genocide committed on the Polish nation by the Soviet Union. Official documents and the order of execution were received by President of Poland, Wojciech Jaruzelski, from the representative of the Soviet Union, First Secretary of the Communist Party, Mr. M. Gorbachev. In 1992 President of the Soviet Union, Boris Yeltzin also turned over a set of Katyn documents to Polish President, Lech Walesa after a meeting at a military cemetery at Powazki, Warsaw, Poland. Thus it was finally verified that millions perished under the communist terror. Even though, “Communism” has fallen in the Soviet Union and also in former satellite nations of Eastern Europe, no compensation or any reparations were made to the families and relatives of the perished victims or to Poland. Germany has been paying compensation for many years since the Nuremberg trials. Why not Russia? This year is the 74th anniversary of the Katyn forest massacre and the 75th anniversary of World War II.

On April 10, 2010 due to a tragic airplane crash, 96 officials and representatives of the Polish government perished and were killed near Smolensk, while en-route to KATYN to commemorate the 70th Anniversary of the massacre and to receive further documentation investigating the murders of the Polish officers in 1940 by the Soviet Secret Police known as: NKVD (KGB). Among the victims were the President of Poland, Lech Kaczynski, his wife and other high representatives of the Polish  Government, members of Parliament, clergy and Army generals and officers.

It is proposed by the committee that instead of flowers, donations be made to cover the expense of repairs to the monument. Also wreaths and flowers may be placed by the monument.