(New Jersey) Governor Christie’s decision to conditionally veto Senate Bill 3040 is the final proof, if proof were needed, that he is intent on destroying the pension system before his term is complete.

The legislation he vetoed represented the best practices of well-funded and professionally managed police and fire pension systems from throughout the United States. Its primary purpose was to remove the New Jersey Police and Firemen’s Retirement System (PFRS) from the political interference and blatant mismanagement of the State that has underfunded it for nearly 20 years. It would have placed PFRS into the hands of the employers and employees who fund and benefit from it by focusing primarily on fully funding the system. This would have been accomplished by hiring professionals and money managers who would focus only on PFRS with oversight from a new Board of Trustees who could direct the system outside of the political winds in Trenton.

Despite our agreement to a number of requested changes made by the Governor’s Office the Governor continued to move the finish line with every amendment we would OK. True to his seven plus years in office, Chris Christie viewed this negotiation as a “do as I say or else” process. We went into our discussions with his office with an open mind and we made an honest effort to accommodate his issues. Sadly, he has decided that saying yes to improving PFRS would ruin his record of robbing the hard working men and women of law enforcement and the fire service of their livelihoods and their future retirements.

The fact remains that our pension system is worse off since Chris Christie took office. The value of our pensions has dropped. His investments have flopped. His reforms have denied our oldest retirees of their ability to pay the bills. He has forced recently hired first responders to pay more for less retirement security.

We proposed this legislation to build upon what we know works in other states. We proposed this reform because we know from experience that politics and personal agenda drive pension funding and their investments in New Jersey. And we know when given a chance to avoid making pension payments that the State and local governments have a history of doing just that.

When all is said and done, law enforcement officers and firefighters are taxpayers too. Our members are promised when they take their oath that a pension awaits them at the end of their career after sacrificing themselves for the safety of their communities. We deserve the opportunities that Senate Bill 3040 would offer to us to fund and secure PFRS for generations. Chris Christie would rather play games and use poison pills in a veto than admit he has failed our members and give us a chance to do what he has proved he can’t do.

Thankfully he will no longer be Governor in 8 months and we look forward to moving this common sense proposal when his time in Trenton mercifully comes to an end. 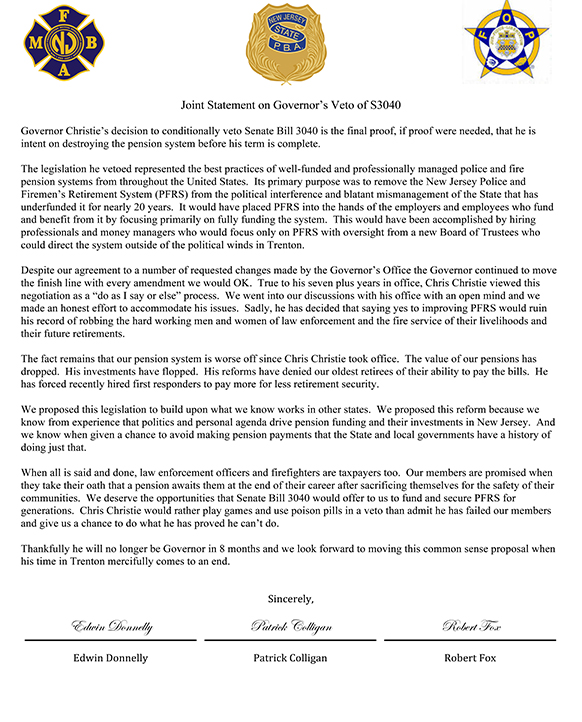