Sextet to Salute Benny Goodman On May 3rd

(Morristown, NJ) – Jazz clarinetist Ken Peplowski will pay tribute to jazz legend Benny Goodman at the Bickford Theatre on Thursday, May 3.  He and his Sextet, featuring Chuck Redd on vibes, Rossano Sportiello on piano, Sean Smith on bass, Matt Witek on drums, and Hilary Gardner on vocals, remember the great clarinetist in celebration of the 80th anniversary of the famous Carnegie Hall Jazz Concert of 1938. 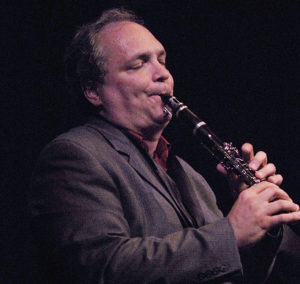 PHOTO: Jazz clarinetist Ken Peplowski will salute the legendary Benny Goodman at the Bickford Theatre at the Morris Museum on Thursday, May 3. Photo courtesy of the artist.

From the Newport Jazz Festival to the Hollywood Bowl, Ken Peplowski has become one of the most popular clarinet players in jazz not only for his joyful playing but also for his great sense of humor. He performs all over the world, in concerts, for workshops, on jazz cruises and even on film soundtracks. He has recorded more than 50 CDs as a soloist and has appeared on close to 400 as a sideman, performing or recording with many greats including Benny Goodman, Mel Torme, Charlie Byrd, Peggy Lee, Madonna, Woody Allen, and even the Cincinnati Pops.

A long-time consultant to The Jazz Cruise and one of their most popular artists, he was elected into the Jazz Cruise Hall of Fame in 2013. He has received the prestigious Sarasota Jazz Festival’s “Satchmo” Award and the Hot House Jazz Magazine’s Fan’s Decision Award for Favorite Clarinet, and recently was honored by “Highlights in Jazz” in New York City.

Peplowski will be joined by vibes great Chuck Redd whom he met through guitarist Charlie Byrd. Redd was the featured vibraphonist with the Mel Torme All-Star Jazz Quintet in the 1990s with whom he appeared at Carnegie Hall and on the Tonight Show with Johnny Carson. Redd has toured with Charlie Byrd, Dizzy Gillespie, Dick Hyman, Monty Alexander, the Lionel Hampton Big Band, and the Clayton-Hamilton Jazz Orchestra.

The Sextet will also include the award-winning pianist Rossano Sportiello who appeared most recently at the Bickford Theatre with jazz bassist Nicki Parrott. Sportiello tours internationally and has performed with many of the world’s greatest jazz musicians including Clark Terry, Bucky Pizzarelli, Barry Harris, and Houston Person. On vocals will be the critically acclaimed Hilary Gardner who is the founder of the vocal trio “Duchess” and has become a New York City favorite. The bassist is the first-call sideman Sean Smith who has toured with luminaries such as Gerry Mulligan, Benny Carter, Flip Phillips, Art Farmer and Peggy Lee. With degrees from Berkelee and Cal State, drummer Matt Witek brings a musical approach to his playing that has let to performances with the John Pizzarelli Quartet, the Larry Fuller Trio, Russell Malone, Chuck Redd, Harry Allen, and many others.

A Salute to Benny Goodman with the Ken Peplowski Sextet will be at the Bickford Theatre on Thursday, May 3, at 7:30 p.m. Tickets may be purchased online at morrismuseum.org, by phone at (973) 971-3706, or in person at the Bickford Theatre Box Office. Morris Museum members pay $25 both in advance and at the door. The Morris Museum’s Bickford Theatre is located at 6 Normandy Heights Road in Morristown, NJ, and offers free parking and full accessibility. Box office hours for phone sales are Monday through Friday, 10:00 a.m. to 5:00 p.m. Walk-up hours are Tuesday through Friday, 11:00 a.m. to 5:00 p.m.