The New Jersey Devils find themselves in 7th position of the standings in which the top 8 teams make the Playoffs securing the first Wild Card spot. The Hockey Playoff positions are divided up by the top 3 teams in the Atlantic Division.  Then the top 3 teams in the Metropolitan Division with the top 2 best records of the remaining Eastern Conference teams securing the Playoffs.

Photo: The 4 Devils whose Jersey hangs from the Rafters at The Rock: Brodeur, Niedermayer, Daneyko, and Stevens. Elias joins his Stanley Cup Winning teammates!

The Devils play in the Metropolitan Division with the Capitals, Penguins, Flyers, Hurricanes, Islanders, Rangers, & Blue Jackets. The Devils have been among the top 8 positions the entire season. 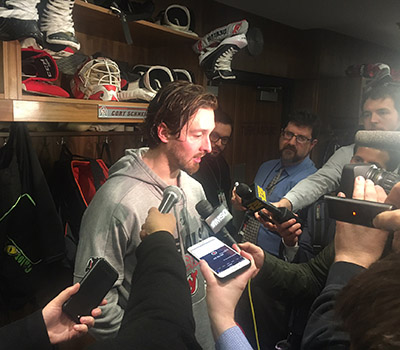 Breaking the Playoff drought has been the goal of the new ownership lead by GM Ray Shero whose steady hand has made the Devils younger, faster and hungrier. Coach John Hynes has coached a mixture of young talented rookies playing along with young veterans lead by All-Star Taylor Hall.  The number 1 Draft Choice Nico Hischier who hails from Switzerland has made the Devils contenders. What may be the biggest surprise is the goal tending of Keith Kinkaid who has stepped in for the injured Corey Schneider and kept the Devils in a Playoff spot.

In photo: Keith Kinkaid the steady Devils back up goalie has been thrust into the starting role with an injury to Corey Schneider. Kinkaid has kept the Devils in Playoff contention.

On the night of the Patrick Elias retirement ceremonies, the Devils were on a two game losing streak and facing the Islanders who are trying to move up in the standings.  The Devils trailed 1-0 entering the third period and with a tough 3 game road trip set to begin NJ once again answered the bell with Kyle Palmieri scoring 2 goals with assists from Taylor Hall and two 3rd period power play kills. Patrick Elias, who won 2 Stanley Cups with the only team he ever played for spanning a 20 year career as a Devil, gave the best retirement speech I ever heard.  Elias spoke for nearly 30 minutes thanking the players, coaches and ownership for treating him right. But it was the ability to show the fans that he really appreciated them, and when given the choice to leave the Devils, he stayed in NJ.  It’s become common place to change teams, but you could tell that Elias gave the Devils a hometown discount and the Devils never forgot, and, the fans have memories for a lifetime. 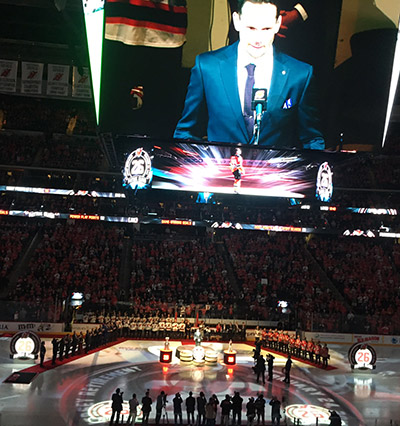 NJ picked up Michael Grabner before the trading deadline to help add some scoring.

In photo: The NJ Devils retired Patrick Elias’ No. 26 on Saturday to hang besides the legendary Martin Brodeur (30), Ken Daneyko (3 ), Scott Stevens (4), and Scott Niedermayer (27). All 4 legends were on hand to partake in the emotional ceremonies!

Patrick Elias’ jersey hangs in the Devils locker room as an inspiration to the new Devils team who hope to return to the Playoffs this season ending a 5 year drought.

Patrick Elias hanging out during the Devils practice eats some bacon and chats with the media ! Elias was always very friendly and assessable with the media. 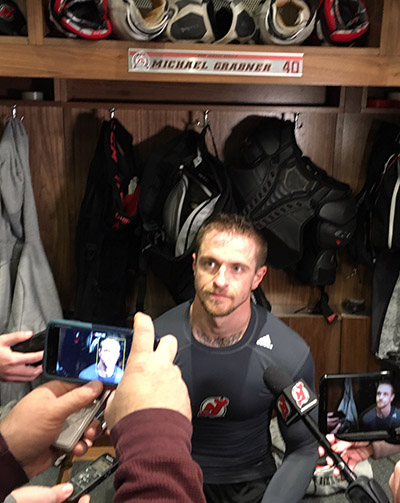 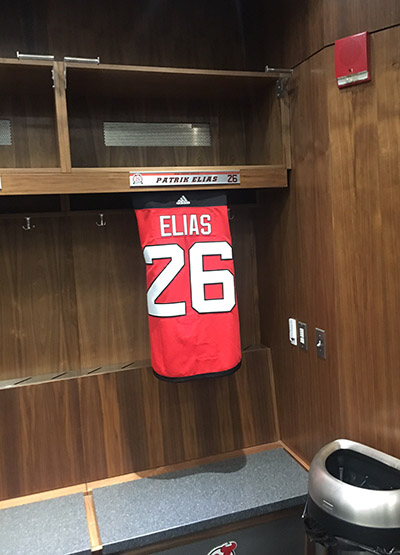 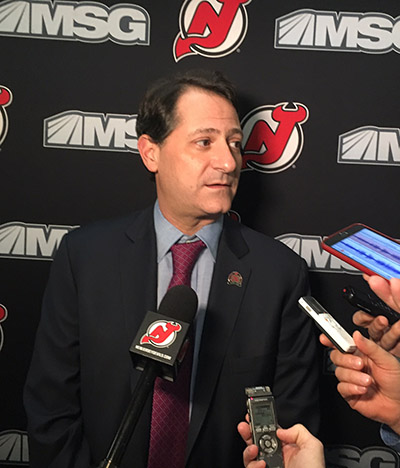 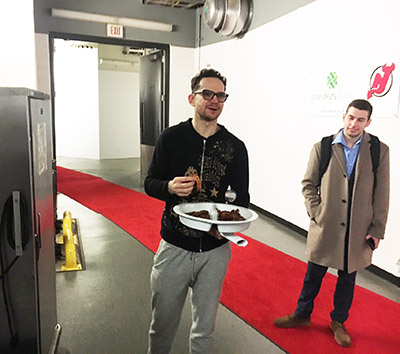 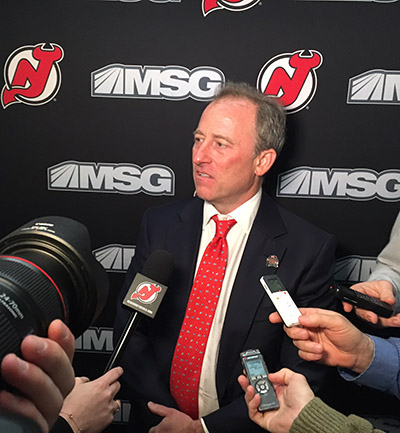