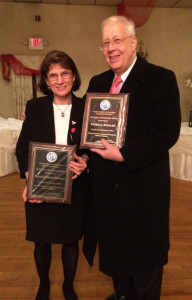 In photo on right: HEIDI JADWIGA KOPALA AND TOM KAZALSKI

The Vice President for American Affairs of the PAC-NJD, Mrs. Dorothy Sowchuk, who also is president of the Polish American Heritage League – sponsors of the annual Polish Heritage Festival,  that takes place on the second Sunday in June at the PNC Bank Center in Holmdel, New Jersey, introduced Mrs. Kopala. A longtime serving member of both the Polish American Heritage League and the General Pulaski Memorial Parade Committee, Mrs. Kopala, over the past 14 years has held the position of Account Auditor in the Parish Internal Audit Department of the Roman Catholic Archdiocese of Newark. She is active in the parish life of Saint Stanislas Church in Newark.  With her beautiful flower arrangements, Jadzia enlivened the Polish Cultural Center in Clark when she served on the Social Committee and helped to prepare ad journals for special events.

The seventh and youngest child of Czesława and Antoni Gabryszewski, the young Jadwiga grew up in Ląkie, Poland, a village surrounded by beautiful lakes in the environs of Skępe, a small city near Torun.   She learned at home to be ever mindful of the needs of others and did charity work as a youngster. After completing her education in Torun, Jadwiga emigrated to America and added “Heidi” as her first name upon becoming an American citizen.  She settled in Irvington and married Stanley Kopala.  They are the proud parents of two sons, Adam and David, who recently earned university degrees.  Jadzia and Stanley now live in New Providence and recently became grandparents after the birth of their beautiful granddaughter, Ela Sofia.

When this writer asked Jadzia what propels her exceptional record of activity on behalf of Polonia, she observed that:  while embracing the United States of America as her adopted country, she continues to value her Polish heritage, and as time goes by, she has become increasingly aware of the strength of the Christian and democratic values which Poles and Americans share.  This is why it is important for her to work to improve both people-to-people and state-to-state relations between America and Poland,  the two peoples and countries she loves.

Mr. Thomas J. Kazalski is a model example of the Old Polonia.  His father’s side of the family has been in the United States for four generations and emigrated from the environs of Warsaw, while his mother’s side of the family has been here for three generations.  Tom grew up in “Polish” Irvington and earned degrees in chemical engineering from the then Newark College of Engineering, now New Jersey Institute of Technology, and an MBA Degree.  He is a successful manufacturer’s representative for water purification and waste treatment systems.  Thanks to Tom’s expert advice and action, our environment is  healthier and safer. 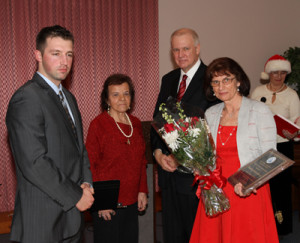 This writer has served on the Polish Heritage Festival Committee since 2011, and admires Tom’s highly developed skills in critical thinking and his fair, firm, and friendly management style.  He is the long serving treasurer of the Polish American Heritage League, the organization that sponsors the annual Polish Heritage Festival, which will take place this year on June 8.  This year Tom is in charge of the Festival’s main Plaza Show, ad journal, and raffle. Like Heidi, Tom also is a longtime serving member of the standing committee, the General Casimir Pułaski Memorial Parade Committee that produces the annual Pułaski Day Parade in New York City every year.  This year the parade will take place on Sunday, October 5.

When I asked Tom for his views on how the Old Polonia and the New Polonia might work together more productively, he registered his skepticism about the soundness of my question and responded that those who do volunteer committee work for Polonia need to observe transparency in money matters and follow the principles of democratic corporate governance and reciprocity toward our benefactors.  Tom is justifiably proud of the fact that the General Pułaski Memorial Parade Committee is the ONLY sponsoring organization of the Polish and Slavic Federal Credit Union (PSFCU) that shows reciprocity for the credit union’s collection and transfer of dues to the parade committee by maintaining a good checking account with the PSFCU and paying all of its bills with checks drawn on that account.  This keeps Polish money in the Polish community.

Heidi and Tom well merit praise for the hard volunteer work that they do for Polonia.