WARSAW, Poland, Jan. 30, 2014 – Poland continues to be an important strategic ally through NATO, in Europe and around the world, Defense Secretary Chuck Hagel said during a joint press conference with his Polish counterpart Defense Minister Tomasz Siemoniak.

In photo above: U.S. Defense Secretary Chuck Hagel lays a wreath at the Tomb of the Unknown Soldier in Warsaw, Poland, Jan. 30, 2014. Hagel was on a trip to Europe to meet with defense leaders and attend the 50th Munich Security Conference.   DOD photo by U.S. Marine Corps Sgt. Aaron Hostutler

Hagel spent the day with Polish military and government leaders. In each meeting — with Siemoniak and Foreign Minister Radoslaw Sikorski — the secretary emphasized the importance of the U.S.-Poland strategic alliance, noting Poland is a strong U.S. partner and a good friend.

The secretary said he would continue that emphasis during meetings with Polish President Bronislaw Komorowski and Prime Minister Donald Tusk.

“I want to particularly acknowledge and thank Poland for its contribution in Iraq and Afghanistan. Poland was 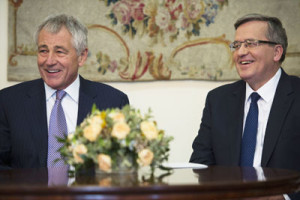 a partner with the United States in both of those wars at great sacrifice,” Hagel said.

“Over the last few years we have opened up a new chapter of friendship, of partnership that dates back to America’s independence, when Poland’s great Gen. Casimir Pulaski volunteered to serve under George Washington,” the secretary added.

Pulaski was so good at leading U.S. troops on horseback that he’s considered the father of American cavalry, Hagel said. Hundreds of U.S. monuments, memorial plaques, streets and parks are named in his honor.

For Hagel, the U.S.-Poland relationship is personal.

“My grandmother’s maiden name was Konkolewski,” he said, “and her parents were married in a little village here in Poland [called Kiszkow] that I will have the occasion to visit tomorrow. This is the location of the rebuilt church where they were married, and the minister gave me copies of the marriage license.” 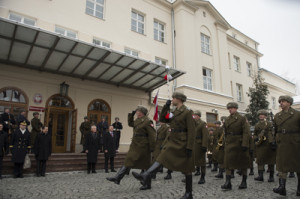 The United States and Poland, whose defense cooperation is strong and enduring, Hagel said, are bound by culture, history and personal relationships, and by shared interests in peace and security.

Hagel began his first official trip to Poland as defense secretary on January 30th in a snow-covered urban landscape under cloudy Warsaw skies, in temperatures that a gusty wind dragged into the single digits.

He visited Piłsudski Square and its Tomb of the Unknown, which holds the unidentified body of a young soldier who fell during the Defense of Lwów. The battle for control of that city took place in the early 1900s between attacking forces of the West Ukrainian People’s Republic and local Polish civilians who were later helped by regular Polish Army forces.

At the tomb the secretary laid a wreath and signed the guest book.

“I am grateful for the opportunity to salute the brave fallen Polish soldiers represented here at this solemn monument,” he wrote, signing the entry “Chuck Hagel.”

Afterward, at the Ministry of National Defense, Hagel met with Siemoniak before the joint press conference.

In his opening statement, the defense minister praised the United States’ decisive role in such historical events as the early years of Poland’s struggle for independence, and Poland’s entry 15 years ago into the NATO alliance. 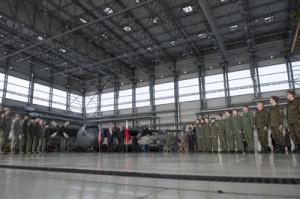 Siemoniak said Poland is ready for concrete action to modernize its armed forces through the great financial effort that is taken by its citizens and through organizing regional security policy.

“The effectiveness of these actions and our efforts depends on the support and presence of the United States,” Siemoniak added. “There is no thinking about the safety of Poland and this part of Europe in the 21st century without the United States.”

For his part, Hagel noted tangible examples of growing U.S.-Polish military cooperation, including in missile defense, where the United States and Poland continue to work bilaterally and through NATO to respond to ballistic missile threats.

“The United States is firmly committed to deploying a U.S. missile defense system to Poland. We look forward to this system coming online in 2018 as part of phase three of the European Phased Adaptive Approach,” Hagel said.

A second example of cooperation is the groundbreaking joint aviation detachment at Powidz Air Base, where Hagel traveled to the following day.

There, he said, American and Polish airmen train and work side by side every day. The detachment sends an important defense capability message to U.S. allies and partners, the secretary said, adding, “The message is that the United States remains committed to European and Polish defense.”

It also shows that the United States and its allies are open to new and innovative ways of thinking about how militaries can collaborate and bring more value to single and joint capabilities, Hagel said. 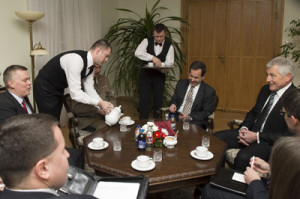 “The United States greatly appreciates Poland inviting us and hosting that detachment,” he added.

The two nations also are working to expand training and exercises through the aviation detachment, including regional partners such as Romania, which is the latest NATO member to acquire F-16 fighter jets.

Because Poland has demonstrated its leadership, willingness and commitment to play a significant leadership role in Central Europe, Hagel said, the U.S.-Poland partnership and the joint action site are particularly important and well suited to future exercises and training opportunities.

These are but a couple of the concrete, tangible expressions of American’s strong security relationship with Poland, the secretary said, and they clearly reaffirm the U.S. commitment to Central and Eastern Europe, and they form a foundation to support an enduring partnership with these countries in this region well into the future.

“As Poland explores options for its own missile defense capabilities,” Hagel said, “there is an unmistakable opportunity for us both to forge even closer cooperation in this area, leveraging cutting-edge technology and enhanced NATO capability.”

This, he added, will benefit Poland, the United States and the entire transatlantic alliance. 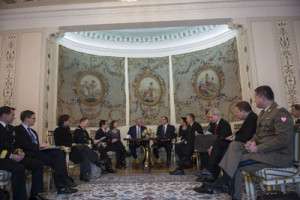 “The minister and I also discussed today a continuing commitment to supporting Poland’s defense modernization efforts,” the secretary said.

“In an era of fiscal pressures that reside on both sides of the Atlantic,” Hagel added, “this investment is particularly required to move our alliance further, deeper, closer into the 21st century, ultimately allowing both our militaries to collaborate much closer on  more findings in the future.”

Following Poland, Hagel traveled to the Munich Security Conference in Germany to participate with Secretary of State John Kerry in a joint panel and to meet with counterparts and officials from other nations on the sidelines of the conference.

In photo below: U.S. Defense Secretary Chuck Hagel meets with Polish Foreign Minister Radoslaw Sikorski at the Ministry of Foreign Affairs in Warsaw, Poland, Jan. 30, 2014. Hagel is on a trip to Europe to meet with defense leaders and attend the 50th Munich Security Conference. DOD photo by U.S. Marine Corps Sgt. Aaron Hostutler 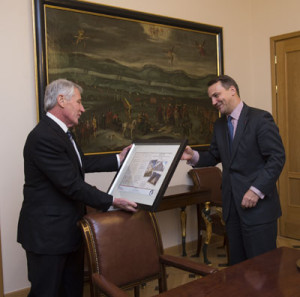