Gorecki In Context
Essays On Music

This volume gathers interviews and studies of the music of the Polish composer,  Henryk Mikołaj Górecki (1933-2010). Contributors include the composer himself – in a series of interviews spanning his entire career, from 1962 to 2008 – as well as leading Górecki scholars from Poland, the U.K., the U.S., and Australia. Chapters highlight three of the four symphonies: the Second Copernican (Kinga Kiwała), the Third, The Symphony of Sorrowful Songs (Maja Trochimczyk) and the Fourth Tansman Episodes (Andrzej Wendland). Two studies by eminent Polish scholar and Górecki’s personal friend, Prof. Teresa Malecka present the composer’s links to Polish musical traditions and an overview of his piano music.  An overview of Górecki’s life and career and a case study of his visit to Los Angeles in 1997, when he conducted his Third Symphony for the first time outside of Poland, round up the volume. The collection includes also a list of works, music examples, portraits, photographs, and a bibliography. 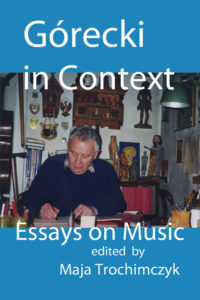 Maja Trochimczyk, Ph.D., is a music historian, poet, photographer, and non-profit director born in Poland and living in California (www.trochimczyk.net). Her work on Górecki was previously published in the Musical Quarterly, the Polish Music Journal, and Organized Sound. She published six books on music: After Chopin: Essays in Polish Music; The Music of Louis Andriessen, Polish Dance in Southern California, A Romantic Century in Polish Music, “Lutoslawski: Music and Legacy (co-edited with Stanislaw Latek) and most recently Frédéric Chopin: A Research and Information Guide (Routledge, co-edited with William Smialek, rev. ed., 2015). She also published 27 peer-reviewed articles in such journals as Computer Music Journal, Contemporary Music Review, Leonardo, American Music, Muzyka, Musical Quarterly, Polish Review, Studia Musicologica, Polish American Studies, and Tempo, as well as 18 book chapters in edited volumes on Chopin, Lutosławski, women composers, Polish music after 1945, and ecomusicology. Hundreds of her articles and poems appeared in English, Polish, as well as in German, French, Chinese, Spanish and Serbian translations. As one of the organizers of the 1997 Górecki Autumn Residency at the University of Southern California in Los Angeles, and the composer’s personal translator and guide, she had an unusually close contact with the reclusive composer and was able to present his views in two interviews and several articles, with a focus on the Third Symphony.