Eva Snyder of South Hadley, Massachusetts, was the recipient of the Freddy K. Jr. Scholarship Award for 2013.  She accepted her check of $1,000 at The Pulaski Park in Three Rivers, Massachusetts this past August. 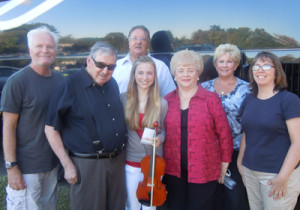 Eva has been listening to and performing Polka music her whole life. She plays violin, guitar and piano. She started playing violin when she was three years old. At the age of six, she played violin on one of her grandfather’s recordings. Throughout high school, Eva performed with the Springfield Symphony Youth Orchestra and the Mount Holyoke College Orchestra.  She performed in plays and musicals every year in high school.  She was class President of her Freshman, Sophomore, and Junior years, received the George Eastman Young Leaders Scholarship Award, and appeared in a Talented Teens article in the Springfield Republican Newspaper for drama and music. Eva has donated her time for benefit concerts and other school functions.  She has written over 40 songs, which are copyrighted and appear on iTunes and Amazon Music.  One of her greatest personal accomplishments was writing a song titled “Red Bandana” dedicated to her Grandparents, Happy Louie and Julcia Dusseault, performing it at the United States Polka Association convention, and then presenting her grandparents with the USPA Lifetime Achievement Award for their contribution to Polka Music.

In photo above – Granddaughter of Happy Louie & Julcia: Eva Snyder in the center flanked by her Grandparents, Happy Louie and Julcia of Wilbraham, MA, her parents, Gordon and Diane Snyder. Freddy K and Linda Kendzierski in the rear.

Eva graduated from The MacDuffie School in Granby, MA where she studied Advanced Physics, Honors Pre AP Calculus and Advanced Interdisciplinary Science among her other courses, and was on the Maximum Honor Roll. Eva attends Mount Holyoke College where she is majoring in Computer Science. 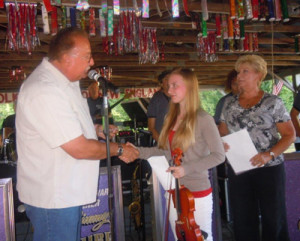 The Freddy K Jr. Music Scholarship Committee is proud of our judges this year who chose Eva to be the recipient of this year’s award. She is a credit to all the young people in our music industry.

The Freddy K. Jr. Music Scholarship Committee is now accepting requests for applications for the 2014 Scholarship award.  Applicants must be high school seniors who have been accepted to an accredited college and play a musical instrument.  The award is presented at a Polka Festival of their choice each summer.

Anyone who is interested in applying for the scholarship award can contact the Scholarship Committee at: The Freddy K. Jr. Scholarship Fund, 50 Totten Drive, Bridgewater, NJ  08807 Or you can download an application on our website www.freddykjrmusicscholarship.com