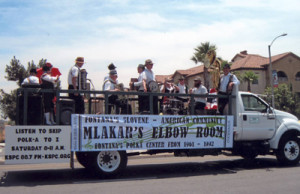 June 1st marked the 100 year anniversary of the birth of the town of Fontana. The town staged a 13 mile run and a parade on Sierra Ave. The Slovene Hall entry in the parade was a flatbed truck carrying musicians playing polkas, recalling Joe Mlakar’s bar of yesteryear. From 1961 to 1992, Joe Mlakar owned and operated a bar in Fontana called “Mlakar’s Elbow Room,” which offered live polka music nightly.    The Mlakars and many other musicians climbed aboard, playing polkas along the parade route, after which everyone returned to the hall to drink, eat, enjoy more music, and dance. Despite baking in the sun for hours, the musicians couldn’t put their instruments down, continuing the festivity while everyone ate pizza provided by Eric Woods, who manages the hall.  And these are the same musicians that “starred” in the July 31 episode of the ABC Family channel’s sitcom, Baby Daddy. Sorry for the late notice – I just found out. The episode visits the Brats and Beers Tavern where the “Haus Band” performed, consisting of Frank Rote, Jon Miller, Jim Ogden, and Fred Mlakar. The band plays two of Joe Mlakar’s original tunes, Glacier Polka and Sequoia Polka. Maybe you can catch it on reruns. Of course, they may get edited out. 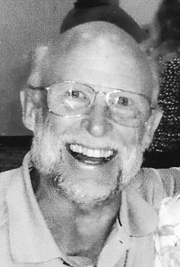