Edward (Ed) Joseph Dybicz, age 91, of Swedesburg, Pa., passed away peacefully on Tuesday, February 17, 2015, at Mercy Suburban Hospital. He was the son of the late Joseph A. and the late Helen B. (Sojkowski) and the brother of the late Marie H. Lewandowski of Philadelphia. He is survived by many cousins and his three God-children, Roberta Nelson of Swedesburg, Alice Smedley of Swedesboro, N.J., and Elaine Parciak of Plantsville, Conn. 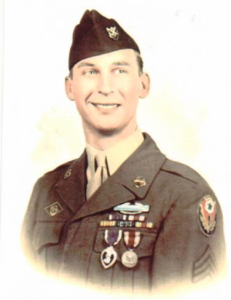 Newspaper reporter, historical writer, office worker, civic servant, and volunteer fireman, he was born July 14, 1923 in Swedesburg. Graduate of Upper Merion High School, Class of 1941, where he was class orator and editor of the school newspaper. Senior year he won first prize in the Pennsylvania Newspaper Publishers High School Reporters Contest at Penn State College. He completed extensive courses of study in Foreign Area and Language at the University of Iowa at Iowa City, where he was a member of the Newman Club. He served with the 114th Regiment, 44th Infantry Division, U.S. Seventh Army, European Theatre of Operations during World War II. He was a non-commisioned officer and holds the Purple Heart Medal, two Bronze Campaign Stars for the Northern France and Rhineland Campaighs, Victory Medal, Good Conduct Medal, European-African-Middle East Medal, and American Service Medal. He was a staff member of the Conshohocken Recorder in 1941 and was a correspondent for the Norristown Times Herald for 30 years. He covered the papal visit to the U.S. of Pope John Paul II in 1979 and met the pontiff at St. Charles Borromeo Seminary, Lower Merion Township. He was also a retired office employee of the Alan Wood Company of Plymouth Township.

He was one of the original and the last surviving organizer of The Swedesburg Volunteer Fire Company in February of 1942 and served as it’s recording secretary for 27 years. Also as a director and member of the fire police. He is a life member of the company. He received the Eternal Flame Award and the Fire Police Award from the firehouse. Mr. Dybicz served as vice-chairman of the Upper Merion Municipal Authority from 1953 to 1956. He was also retired from the Upper Merion Township Auxiliary Police and was chairman of The Upper Merion Township 1960 Clean-Up, Fix-Up, Paint-Up Campaign in which the township won an outstanding achievement award from the National Headquarters in Washington,D.C.

He was a historian and wrote the History of Swedesburg in 1962 when the community marked its 250th anniversary. His historical articles appeared in many newspapers and magazines. Due to his research, the name of Gen. Casimir Pulaski, commander of the American Cavalry during the American Revolutionary War, was added to the list of officers on the National  Memorial Arch at Valley Forge National Historical Park in 1950. He answered historical inquiries for the Upper Merion Township Board of Supervisors in the late 1940’s. For his historical writings he received awards from the Upper Merion Park and Historical Foundation, the Legion of Honor of The Chapel of the Four Chaplains and from the Montgomery County Fire Chiefs Mutual Aid Association. He was named “Mr. Upper Merion History” by the Upper Merion Board of Supervisors in September of 2005 and honored by the township senior organization.

He was co-author of the Upper Merion Township chapter of the Second Hundred Years History of Montgomery County. He focused many of his historical articles on the ethnic contributions to the history of the United States.  In September of 2007 he was honored as the “Upper Merion Township Library Friend of the Year” award in recognition and appreciation of his service to the library.

Ed was a member of Sacred Heart Church, Swedesburg, and a life member of it’s Holy Name Society. He was also an usher and collector. He was the Holy Name Society Man of The Year and served on the 100th anniversary committee for the church. He is a life member of the Veterans of Foreign Wars, Post 7878 of Upper Merion and V.F.W. Post 840, the 44th Infantry Division Association, D.A.V. Post 25 of Norristown, Mlotkowski Memorial Brigade Society of Fort Delaware, Montgomery County Historical Society, Valley Forge Historical Society, Montgomery County Fire Police, Upper Merion Township Auxilliary Police, Swedish Heritage Society of Swedesburg, Iowa, an emeritus member of the King of Prussia Historical Society and was a promoter of the Miraculous Medal Association of Germantown.

Relatives and Friends are invited to his Funeral Mass on Monday, February 23, 10 a.m., at Sacred Heart Church, 120 Jefferson Street, Swedesburg, Pa., 19405 where they may call after 9 a.m. Interment to follow in St Augustine Cemetery. Mass Cards in his memory would be appreciated. Arrangements are by the Bernard S. Gutkowski Funeral Home, Swedesburg, Upper Merion Twp., Pa., 610-275-6385, www.gutkowskifuneralhome.com