World Champion Safecracker Jeff Sitar of Clifton, New Jersey has made a career out of getting people into difficult places, but this is the first time that the supernatural may have played a role in his work. 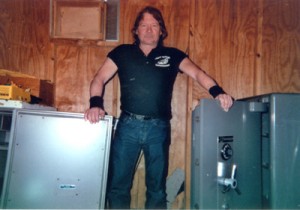 Sitar says he received a call from Steven Cain, an Oklahoma City man, who wanted Jeff to fly out and open two safes that Cain inherited from his deceased brother. It was just like any other call Sitar receives from all over the world on a daily basis – with one big exception. Cain explained that he was inspired to seek out Jeff after he visited his brother’s grave and appealed to him to give him a sign on how to get the safes opened. After he arrived home, Cain picked up his brother’s picture and made another appeal for guidance. While still holding his brother’s picture, he then picked up his TV remote with his other hand and turned it on. The first thing he saw was a promo for an upcoming show. The next thing he heard was, “Come up next… World Champion Safecracker Jeff Sitar.” Cain wasted no time finding a contact number for Sitar and called him.

Sitar was moved by Cain’s story. “Even though I was busy filming various television shows and working for the film, Tower Heist, I felt I had to make the time to go.” What followed was a 14 month odyssey with Cain and Sitar maintaining dialogue. Sitar was determined to get to Oklahoma City to crack those safes and Cain was determined to get him there. Six months before Sitar made the trip, he received another call. This time it was from Omaha, Nebraska. Dan Rocha contacted Jeff to open his antique safe from the late 1800’s. When he found out that Sitar was going to be in Oklahoma City, he offered to strap his safe into an SUV and drive 8 hours to meet him and have him crack that safe.

Finally, after waiting more than a year, Cain welcomed Sitar into his home to crack his safes. “By that time we had spent so much time on the phone for the past 14 months, it was like visiting a friend,” said Sitar. Ultimately, Cain’s brother had “recommended” the right man for the job. Jeff made short order of them. He cracked the first safe the first day in 20 minutes. The next day he cracked the second safe in 5 minutes. But his work was not done for the day. Dan and his wife made the trek from Omaha and Jeff cracked his safe open in 12 minutes without even taking it out of the SUV. Jeff admits he gets great satisfaction from the reaction people have when he can unlock their safes. “Dan was 6 hours into his drive back to Omaha when he called me to say that he and his wife couldn’t stop talking about what I was able to do for them.”

But the best part of the day for Jeff was knowing how much having those safes opened meant for Cain. “I know that he was very close to his brother and that opening these locked safes were in the back of his mind for years. I think now I’ve been able to give him closure. That’s a great feeling.”

Jeff Sitar is an 8 time World Champion Safecracker. He is a registered and bonded professional. What makes Jeff so unique is that he is able to open safes and vaults using just his hands. He has been featured in Maxim, FHM, Men’s Health, and Time Magazine. He has appeared on Good Morning America, The Today Show, Discovery, The History Channel and CNN. He has also assisted numerous police departments, state police, the FBI, DEA, Homeland Security, the U.S. Marshals and the Secret Service on many occasions. He was also named 2012 “Man of the Year” of the North Jersey Master Locksmith Association.