Devils won 8-3. It was NJ’s first ever game in Las Vegas as the Knights played their inaugural season.

Photo: Devils goalie Keith Kinkaid secured the 8-3 win over the Vegas Knights in NJ’s first visit to Vegas. Kinkaid who has been thrown into the starting role over injury plagued Corey Schneider has kept the Devils in the 8th Playoff position as the season comes down to less than 10 games.

The NHL became the first professional league of the big 4: NHL, NBA, NFL, & MLB to bring the team to the “Gambling Capital of the World.” The initial discussion was fostered by NBA Commissioner Adam Silver, himself, a visionary with his initial involvement in the founding of the WNBA in 1997, and more recently with his acceptance that gambling occurs so professional sports cannot hide their heads in a gopher hole.

NHL Commissioner Gary Bettman, a former employee of the NBA, decided to expand the League and bring a franchise to Las Vegas. The franchise has prospered and, in fact, are in first place out West in the Pacific Division; setting an all time record for an expansion team in any major sports league.

NJ truly enjoyed their visit defeating Vegas 8-3… a few yards from Las Vegas Blvd. at the T-Mobile Center. Keith Kinkaid was in goal for the Devils and will always be remembered as securing the Devils, Champions of 3 Stanley Cups, their first win in the Desert of Las Vegas. 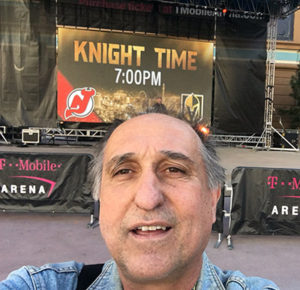