Devils, Rangers, And Islanders
To Skate At Yankee Stadium 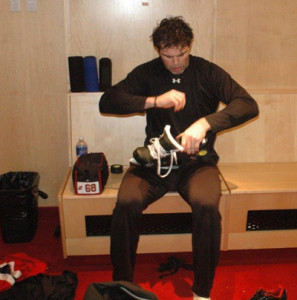 The wonder and magic of playing hockey outdoors has come to Yankee Stadium as the NHL has expanded the one game Winter Classic on New Years’ Day to a stadium series that has gotten the entire country involved.

The success of the Winter Classic is no surprise as fans and teams wanted the chance to drop the puck outdoors in a regular season game in their city, and one game a season was not enough.

In photo on right: Future NHL Hall of Famer Jaromir Jagr (#68) tapes his skates together after every game. Jagr has announced that he will play in his fifth Olympics which will be held in Russia this February. His addition to the Devils has been remarkable. Photo caption and photo by James Dombrowski

The Devils will meet their bitter rivals the NY Rangers on Sunday, January 25th at 12:30 in the afternoon to begin a week of outdoor hockey at Yankee Stadium. The Rangers will battle the Islanders on Wednesday, January 29th at 7:30 pm in what will become an historic moment at the “House that Ruth Built” in the Bronx.

The eyes of the hockey world will be focused on the Bronx, a boro that has just secured the building of a massive hockey center with 13 rinks that will propel NYC to the forefront of skating in the East Coast.

Also getting a chance to play at Yankee Stadium will be Don Bosco High School vs. Christian Brothers Academy on Jan. 31st at 1:15 pm, followed by St. Peter’s vs. Chatham. On Feb. 1st, Delbarton will play Catholic Memorial Boston.

The following day, February 2nd, will mark the first ever cold weather outdoor Super Bowl at MetLife Stadium in East Rutherford, home of the Jets and Giants. The outdoor hockey games are definitely fitting a week leading up to the biggest sporting event of modern times.  And Yankee Stadium the most famous venue outside of the Roman Coliseum has no duplicate.

Outside of New York there will also be two other outdoor games played with the Anaheim Ducks meeting the LAS kings at Dodgers Stadium on January 25th.

And rounding out the 4 game series on March 1st is the Blackhawks hosting the Penguins at Soldier Field.