A botanist with the New Jersey Department of Environmental Protection’s Office of Natural Lands Management discovered stalked woolgrass (Scirpus pedicellatus) along the shore of the Delaware River in July. The last sighting of the plant was in Sussex County on July 4, 1918.

“This discovery is just the latest example to highlight the importance of managing our natural lands, so flora and fauna can continue to thrive,” Commissioner McCabe said. “The presence of this rare plant and others reminds us to appreciate and strengthen the ecological diversity in New Jersey so that future generations may enjoy these beautiful plants.”

Stalked woolgrass is listed as endangered in New Jersey. Although it had not been seen in a century, stalked woolgrass and many other rare and historic plant species are assumed to exist if the habitat that supports the plant also exists. There are 10 other species of woolgrass that grow in the state, but stalked woolgrass is the rarest, having been observed only once before, by Edwin B. Bartram, a member of the Philadelphia Botanical Club, in 1918.

“This is a very exciting discovery,” Assistant Commissioner for Natural and Historic Resources Ray Bukowski said. “It provides a conservation opportunity that didn’t exist before and it underscores the importance of never giving up hope of discovering new locations of our rarest species.”

Stalked woolgrass belongs to a large family of plants known as sedges. It has grass-like leaves that form large clumps and produces flowering stems that grow up to five feet tall. The mature seeds are covered with feathery plumes, which gives the plant its characteristic wooly look.

The species is more common in states north and west of New Jersey and reaches the southeasternmost limit of its range in this state. Its habitat is open marshes on floodplains and river shores.

“Discoveries like this and the recent discovery of a new location for the federally threatened small whorled pogonia orchid in Stokes State Forest highlight the tremendous diversity of New Jersey’s native flora,” Division of Parks and Forestry Director Olivia Glenn said. “The Division works to conserve this diversity of species, which contributes to overall ecosystem health.”

Botanist David Snyder discovered the stalked woolgrass on July 25 when he noticed that several seed heads sticking out of the water looked different from other sedges. The seed heads were the color of manila paper, one of the distinguishing characteristics of stalked woolgrass. At the time of the discovery, floodwaters covered much of the Delaware River shoreline.

“I carefully waded out into the water to collect a sample of the sedge, but high water and heavy rain prevented a thorough survey,” Snyder said. “I was able to return on July 30 and after searching about a quarter-mile of the river shore, I was excited to discover a total of four clumps of stalked woolgrass.” 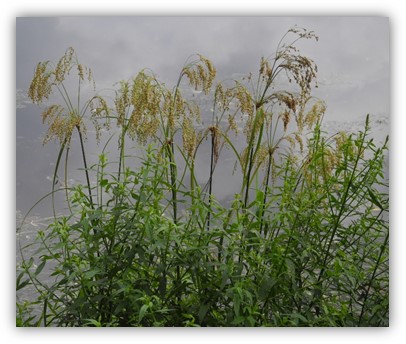 A botanist’s diligent search of areas with suitable habitat at or near a plant’s previously known location can often result in discoveries such as Snyder’s. During and prior to his career with the DEP, Snyder has rediscovered more than 100 plant species previously considered “lost” from the flora of New Jersey.

Habitats along the Delaware River are well documented for supporting many rare plant species and have attracted botanists for more than 200 years.

For a complete list of plant species tracked by the Natural Heritage Program, visit

To view a report on the status and trends of endangered plants in New Jersey, visit https://www.nj.gov/dep/dsr/trends/pdfs/endangered-plant.pdf.

For more information on the Division of Parks and Forestry, visit: